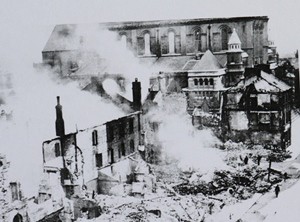 St Anne’s Cathedral is hosting a special service on Sunday April 17 as part of a weekend of events to commemorate the 75th anniversary of the Belfast Blitz.

The ecumenical service of commemoration on April 17 will be held at 3 30pm. It has been organised by St Anne’s in conjunction with St Patrick’s Church, Donegall Street. The service will be led by the Dean, the Very Rev John Mann, and Fr Michael Sheehan, Administrator of St Patrick’s. 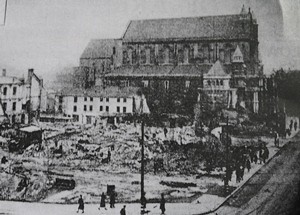 The Cathedral stands alone after buildings around it were demolished in the Blitz.

During the service candles will be lit to offer symbolic reflection for those who lost their lives in the Blitz.

The service, which is open to the public, will mark the end of a weekend of commemorations, beginning with the unveiling of the first in a series of memorial plaques at St George’s Market – which was used as a temporary mortuary during the Blitz – at 10 30am on Friday April 15.

Other events over the weekend will include:

For further information on the Belfast Blitz commemorations, visit