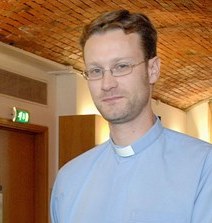 A native of Bangor, he is a former student of Bangor Grammar School. He read Theology at Fitzwilliam College, Cambridge, and after graduation worked for James Brown and Sons Funeral Directors from 1999 to 2006.

Mark was curate assistant in Agherton Parish, Portstewart, from his ordination in June 2008 until his move to St Comgall’s, Rathcoole, in May 2012.

Looking forward to his new role in Belfast Cathedral, Mark said: “I am excited about a new area of ministry that I have not had prior experience of and am looking forward to the team aspect of working in St Anne’s. I think the change will be both stretching and rewarding.

“I have missed choral input over these last few years and look forward to reconnecting with that.”

Mark said the people of Rathcoole parish had been fantastic. “I have really enjoyed working with them. There are challenges in relation to the area, but they welcomed me and made us feel part of things. I enjoyed forming links with other churches and community groups on the estate and will particularly miss my association with Rathcoole Primary School.”

The Dean of Belfast, the Very Rev John Mann, described Mark’s appointment as the opening of ‘another new chapter’ for the St Anne’s.

“I am delighted that Mark has accepted nomination as Dean’s Vicar of Belfast Cathedral,” Dean Mann said.  “I have known Mark since his ordination and am certain he and his wife and their young family will be received by staff, parishioners and volunteers in St Anne’s with open arms and much joy.

“St Comgall’s will miss him, as we of course miss Canon Denise.  As they make their transition, so Mark will need time to make his.  But I am excited about another new chapter opening for the Cathedral and we look forward to Mark’s arrival with us in a month’s time with eager anticipation.”