Launch of ‘Open Door Lunch’ for the homeless 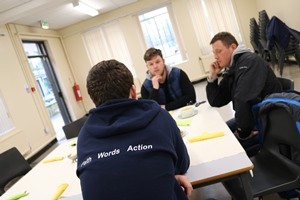 Evangelist Stephen Whitten talks to some of those who called in for the ‘Open Door Lunch.’

A number of people for whom home is the harsh streets of Belfast were able to step away from that life for a short time and enjoy a warm bowl of soup in the comfort of St Anne’s Cathedral Halls on Tuesday lunchtime.

Open Door Lunch is an initiative by Connor Diocese’s Church Army Evangelists aiming to reach out to those who are homeless and sleeping rough on the streets of Belfast.

The project is based at the Cathedral Halls, accessed via Talbot Street, and offers a free hot lunch every Tuesday from 12 noon until 1.30pm.

Evangelists Karen Webb and Stephen Whitten are being supported in the initiative by staff from the Diocese of Connor, parishes in Belfast, and Cathedral staff. The project also has the support of a number of local businesses. 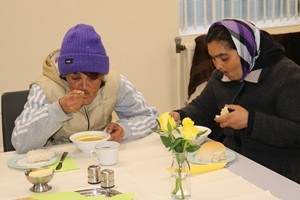 Two Romanian ladies whose home is on the streets of Belfast tuck into their lunch.

The project was inspired by a similar outreach project in Dundee, recently visited by the Connor Evangelists, where the Church Army, in conjunction with Dundee Cathedral, meet and feed the homeless community.

Among those who attended on Tuesday were two Romanian ladies who spend their days in Royal Avenue. When Karen first met them and told them about the Open Door Lunch, they were sitting, some distance apart, outside a business. One sat on a flattened down handbag, and was wrapped in an old sleeping bag, the other had just a towel around her shoulders. It was raining heavily at the time.

Over the soup, bread, buns and tea, the ladies spoke to Karen and volunteer Roy Totten, Glenavy Parish, and overcoming a language barrier they revealed they both had children still in Romania. They indicated they would like to return to the Open Door Lunch next week. 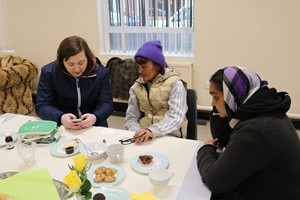 Connor Children’s Officer Christina Baillie takes the opportunity to chat to two ladies who came in for lunch.

A Polish man came for a meal accompanied by a worker from a homeless outreach organisation who said he would encourage other homeless people he has contact with to come along.

“The Polish man was on his way to register as homeless,” Karen said. “I asked him why he had come to Belfast, and he said it was because there were no jobs in Poland.”

Karen and Stephen thanked those who had helped at the Open Door Lunch, including volunteers Roy Totten and Heather Carson, and local businesses who are supporting the initiative.

Karen said: “We were very pleased with how it went and believe it will build up over time.”

“How can we worship a homeless man on Sunday and ignore one on Monday.” Shane Claiborne, author of ‘The Irresistable Revolution.’