Belfast remembers the dead and wounded of the Blitz 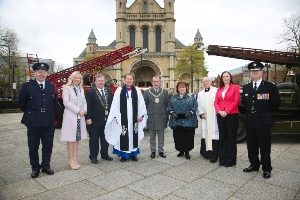 More than 900 people died and 1,500 were injured on the night of Tuesday April 15 1941, when Luftwaffe bombers staged the biggest of four raids on Belfast City.  Another 150 people were killed in a subsequent raid on the night of May 4-5 1941.

One thousand candles burned during the service in St Anne’s, offering symbolic reflection for those who died, and candles were also carried in procession to the altar. Prayers were specially written for the occasion.

The service was attended by dignitaries including the City’s Lord Mayor and Her Majesty’s Lord Lieutenant of Belfast, along with people with memories and links to the Blitz and representatives of the emergency services whose predecessors risked their own lives to save lives in the city of Belfast 75 years ago.

They included representatives of the Fire Service in Dublin, Drogheda and Dundalk, who sent engines to Belfast during the Blitz. Two Merryweather Fire Engines which attended in the wake of the bombings in 1941 made the journey back to Belfast and were parked outside the Cathedral. You can read a fascinating insight into the Drogheda Fire Engine’s involvement on the night of the Blitz here. 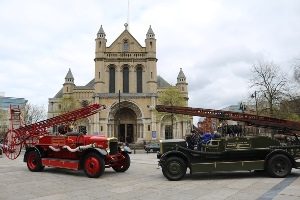 Two Merryweather Fire Engines from Drogheda and Dundalk, which had driven up to Belfast after the Blitz, returned for the commemoration.

Fr Sheehan added: “People emerge in every darkness who demonstrate through their actions your (God’s) goodness; people who come to ease and strengthen, support and defend the innocent, the wounded and the survivor.  We give thanks for those lights which demonstrated courage, care, kindness and honour.  The ambulance service, fire and rescue, wardens and defence units as well as ordinary good neighbours from across our divide.”

Fr Sheehan quoted from a speech made by Her Majesty the Queen during her visit to Dublin Castle: “’We are reminded of the complexities of our history, its many layers and traditions, but also the importance of forbearance and conciliation.  Of being able to bow to the past, but not be bound by it.’

“May we to remember, acknowledge and bow to the past and our dead, but let us not be bound, hardened or indeed deflected from the future by it.” 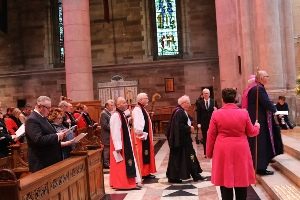 The Church of Ireland Bishops of Connor and Down and Dromore were among those church leaders at the service.

Dean Mann said the indiscriminate bombing of the people of Belfast in 1941 was commemorated with ‘an anguish that is still real.’

“The image of St Anne’s amidst the smouldering ruins after a night of destruction from the air is more powerful than many words for me,” the Dean said. “The indiscriminate bombing of civilians in Belfast, or anywhere for that matter, is something we commemorate with an anguish that is still real these 75 years on. Our prayers reflect this.

“We recall the fear, the death, the injury, the ruination, the many, to this day, whose lives were affected by those few nights that obliterated parts of our city.”

The Dean said he was born in London, as was his mother. “I recall her living through the days of the war as a young girl facing another trauma brought about by the Blitz,” He said. “She was an evacuee to a small village in Dorset. Sounds idyllic. It wasn’t. She, already an orphan for other reasons, was forcibly separated from all that was familiar. It happened here too.”

As well as the invited guests the service was attended by many people of Belfast who had their own memories of the devastation caused by the Blitz. The service was the culmination of a weekend of events marking the 75th anniversary, and at these, people who survived the Blitz shared their memories, many of which have been widely carried in the media.