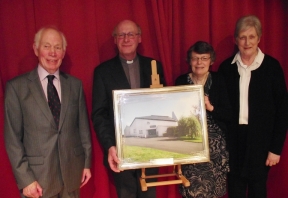 The Rev Canon George Irwin has retired after 27 years as rector of St Mark’s, Ballymacash.

Writing an Open Letter to his parishioners in the latest issue of the Ballymacash Parish News was, Canon Irwin said, ‘one of the most difficult tasks of my ministry, stretching over 36 years.’

He wrote: “This has been our home for over 27 years and the place where our children Richard and Rosalind Jane were reared.”

Two former curates paid their own personal and very poignant tributes to Canon Irwin, with Tom Gordon, now Dean of Leighlin, stating:  “Through him was learned the pastoral priorities of house visiting, the care of the sick and an abiding love of the Anglican tradition.  George’s ministry is one of which has stood the test of time in his love of people, sheer hard work and gentle humour.”

“I recall time after time at the start of our Tuesday morning staff meeting being handed a fairly large pile of index cards with the names and addresses of people to visit and quite often wondering if it would be possible to see so many people in such a short space of time before George would hand me another pile of index visiting cards,” John recalled. “I soon discovered that his passion for pastoral visiting was as a result of his many years of experience and he had it finely tuned…to a fine art.”

Entertainment at the farewell evening was provided by the Choir and Music Group under the guidance of their Director of Music Mr Tim Howe.  A varied programme ranged from ‘Pachelbel Canon in D’ to ‘Lord of the Dance’ and the Beatles classic ‘Hey Jude’ to  personal favourites of Canon Irwin  including ‘My song is love unknown’ and ‘O thou who camest from above’ and Chilcott’s ‘Irish Blessing’ which brought the musical element to a close.

Compere for the evening was George Spence who kept the programme moving in his own inimitable style before two of the parochial nominators, Mr Hilary Morrison and Mrs Kaye Somerville, who played a role in bringing the Rev Irwin to Ballymacash 27 years ago, presented Canon Irwin and his wife Deirdre with a framed picture of the church.

Report  and picture by Brian Kelly