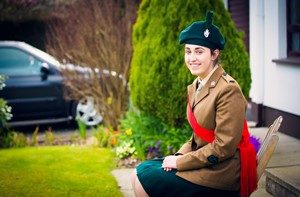 Emmalee Wray will help Her Majesty light the first in a chain of 1,000 beacons to mark the Queen’s 90th birthday. Photo: Kevin Scott, Belfast Telegraph.

Emmalee Wray, a teenage parishioner of St Patrick’s Parish Church, Broughshane, will be a leading light in the Queen’s 90th birthday celebrations!

The 17-year-old from Carnlough has been selected to help Her Majesty light the first in a chain of 1,000 beacons that will be burn across the world to mark her milestone. Emmalee will represent Northern Ireland’s cadets at Windsor Great Park alongside cadets from England, Scotland and Wales.

At around 7pm on Thursday April 21, Her Majesty the Queen, accompanied by The Duke of Edinburgh, The Prince of Wales and The Duchess of Cornwall will light the principal beacon, setting in train a series of more than 1,000 beacon illuminations across the country and worldwide.

Emmalee says: “It’s a once-in-a-lifetime opportunity for me and I am absolutely thrilled to be taking part.

Emmalee joined the cadets five years ago and was chosen for her achievements in the organisation, as well as completing her Bronze and Silver Duke of Edinburgh Awards alongside gaining 8A* and an A grade in her GCSEs.

Emmalee said: “They told me I had excelled and I had shown good qualities so I was chosen to represent them at a special programme for the 60th anniversary run by the cadets and then from there, I was chosen for this.

“It’s great to represent the cadets because I enjoy being involved so much. They’ve given me so many opportunities like I’ve been on an exchange to Canada and this is just another once-in-a-lifetime opportunity.”

The Ballymena Academy pupil will fly out with her proud parents on Thursday morning and will have a day of rehearsals ahead of the ceremony at 7pm where Emmalee will stand alongside the monarch.

Emmalee said the excitement was mounting. “My uniform has never been more carefully cleaned and pressed!” she said.

“I’m not quite sure what to expect, but I know it will be a wonderful day and I will be very proud to represent Ballymena at the Queen’s 90th birthday party!”