End of an era as Scout’s District Commissioner retires 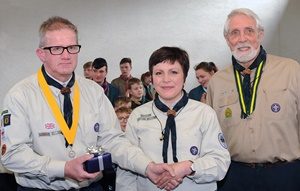 Lisburn and District Scout Council’s St George’s Day parade and service marked the end of an era for Ballymacash parishioner Noel Irwin who is retiring after 11 years as District Commissioner.

During the service on Sunday April 24 in Harmony Hill Presbyterian Church, Billy Mawhinney, District President and a parishioner in St Colman’s, Dunmurry, gave an account of Noel’s scouting career.

He recalled how Noel began his scouting journey as a cub scout in 1st Ballymacash.  As 1st Ballymacash didn’t have a scout troop at that time, he moved to 1st Derriaghy when he was the age to become a scout.  The family moved to Belfast, and Noel became a member of 64th Belfast scout troop for a time, but when they returned to Lisburn Noel joined the Venture Scouts and gained his Queen’s Scout Badge.

In 1983 he became an assistant Beaver Leader and two years later became Ballymacash Cub Scout Leader.  At just 21-years-old, Noel organised his first cub camp when he took the pack to Portumna, County Galway.  As well as running his own cub pack, he was Assistant District Commissioner Public Relations (2002 to 2005). 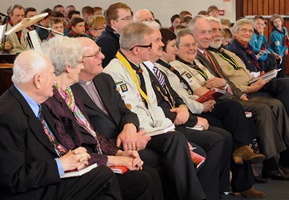 In 2000 Noel was awarded the Chief Scout’s Commendation for his services to scouting and in 2005 he was appointed District Commissioner.  In 2006 he was awarded the Medal of Merit and in 2014 the Silver Acorn.

Billy said: “During his 11 year tenure as District Commissioner, Noel was a gifted team leader and had the great ability to convince leaders to extend their scouting activities and become an ADC and help running the District.  Under Noel’s leadership the District has grown and there are now over 1,100 boys, girls and leaders in the District.

“To all scout leaders, Noel was not just the boss, he was a friend who was always there for help, guidance and assistance.”

Billy said that in addition to running his own scout pack (1st Ballymacash), Noel organised training courses, visited other scout groups and sent weekly e-mails to keep all leaders up to date.  “So, he was not just a one-night-a-week scout leader, it was more like a seven-night-a-week job,” he added.

Noel was also a Youth Rugby Coach and until last summer he coached cricket at Lurgan Cricket Club. He has just been appointed Peoples’ Church Warden at St Mark’s Parish Church, Ballymacash and has joined Portadown Male voice Choir.

Concluding his report, Billy said: “Noel, on behalf of us all in Lisburn and District we thank you for your inspirational leadership during the last 11 years and we wish you all the very best in the future”.

After Billy’s tribute, Audrey Morrow, incoming District Commissioner, presented Noel with a gift in recognition of his exemplary service to scouting in the Lisburn area.  Audrey, District Explorer Scout Commissioner (DESC) and Assistant Scout Leader (ASL) with 1st Derriaghy, takes over from Noel at the end of June.

Report and photos by John Kelly