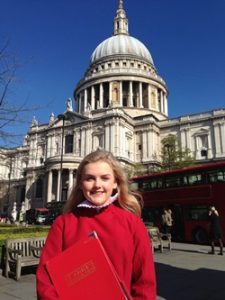 Tania Murphy, a member of the Girls’ Choir at St Anne’s Cathedral, Belfast, has described singing in St Paul’s, London, with choristers from 60 cathedrals across the UK as ‘an experience I will never forget.’

Tania, a Year 12 pupil at Aquinas Grammar School, Belfast, was selected by St Anne’s Master of the Choristers David Stevens to represent the Cathedral at the concert in St Paul’s Cathedral on April 27.

The concert brought choristers representing 60 cathedrals together with the choir of St Paul’s for the first time ever.  It was presented by Classic FM’ s Aled Jones and Alexander Armstrong, and held in the presence of HRH The Duchess of Gloucester, who took the time to chat to all the choristers.

Tania said she had never met Royalty before.  “I felt very privileged and honoured to meet with the Duchess of Gloucester who greeted us very warmly and was very intrigued with the musical pieces which we were performing,” Tania said. 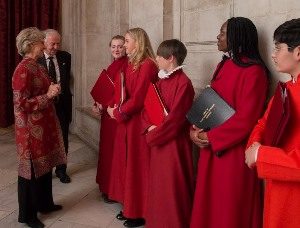 These included Allegri’s Miserere, Britten’s Friday Afternoons and Ceremony of Carols, Tippett’s Five Spirituals, the world premiere of a specially commissioned work by Philip Stopford, and Parry’s I Was Glad.

But Tania’s favourite was Handel’s Zadok the Priest. “It was a very powerful and dramatic opening to the performance,” Tania explained.

“The highlight of my experience was walking into St Paul’s for the first time after seeing it so many times on the television,” Tania said. “It felt very special to be in this iconic cathedral and to sing with other choristers from all over Britain which I have never experienced before.

“I have also formed new lifelong friendships with choristers from different parts of the country who share the same interests as myself. It is definitely an experience which I will never forget!” 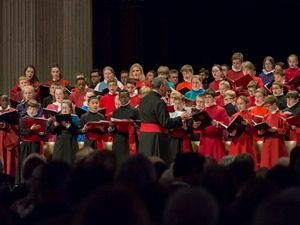 Tania Murphy singing with choristers from 60 UK cathedrals and the choir of St Paul’s.

Tania has sung with the St Anne’s Choir for the past three years.  “I love being a chorister of St Anne’s Cathedral as I have always been intrigued in the concept of choral music and the resonating sound of the music in such a big cathedral as St Anne’s,” she said.

“Being a chorister has given me so many opportunities such as singing in Puccini’s opera Turandot, singing with the St Anne’s choir on a tour of Paris, and of course this wonderful opportunity of being able to sing in St Paul’s Cathedral, London.”

This year is the Friends of Cathedral Music’s diamond jubilee, and the St Paul’s concert on April 27 launched the new Diamond Fund for Choristers which aims to relieve chorister family hardship, and help choristers develop and flourish.