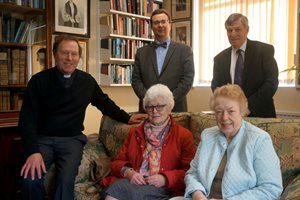 A collection of unpublished chants by the late Dr Harry Grindle is to be digitised and made available at St Anne’s Cathedral, Belfast.

Harry was a former organist at St Anne’s and founder of the Priory Singers.

The Cathedral already uses some of Harry’s chants, as do other choirs, but there are more that are at the moment inaccessible. These will now be digitised (probably over the course of the summer) and made available through the Cathedral for free access. It is Heather’s particular request that there be no restriction on their use.

Heather has already presented a number of Harry’s books which are currently in the Cathedral archive.

Donald, who died in 2013, was a member of Connor Diocesan Council and the organist at St John’s Parish, Malone for 36 years. He was awarded an MBE for services to Music in 2007.

The Grindle/Davison collection of music-related books is ultimately to be treated as one, and will have a special place in the Cathedral Library, where again they may be consulted by anyone.

A further gift is that of Donald Davison’s organ music. This too will be catalogued and made available to organists, especially those learning the organ.

A system for this to work effectively has yet to be devised, but the intent is that the music may be borrowed by organ scholars for extended periods of time.