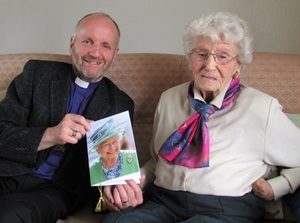 Eleanor Thompson received a visit from the Bishop of Connor, the Rt Rev Alan Abernethy, on the occasion of her 100th birthday.

A Cairncastle parishioner whose father was chief interior design draughtsman on the Titanic has celebrated her 100th birthday – at Titanic Belfast!

Eleanor Thompson said she might never have been born if her father Ambrose Willis had remained on board Titanic as it continued on its ill-fated voyage bound for New York. Instead, he sailed only as far as Southampton, from where he was called home because his baby Nora, Eleanor’s older sister, was unwell, and because he was needed back at Harland & Wolff to work on the Olympic, Titanic’s sister ship.

She said that the ‘unsinkable ship’ had been a source of great pain for her parents Mable and Ambrose, who lost many friends and colleagues when the ship sank, killing more than 1,500 passengers and crew.

“It was never spoken about with us, his four children,” she said. 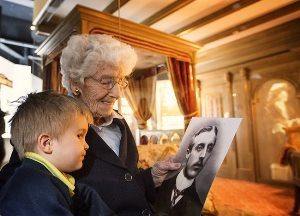 Titanic Belfast hosted Eleanor and her family and friends, including her children Peter and John, grandchildren Vanessa, Elaine and Susan and three of her four great grandchildren, for a 100th birthday party on April 30. At the centre, she was shown her father’s salary book in the Titanic museum.

She blew out the candles on her cake – baked in the shape of a bottle of gin, her favourite tipple – at The Bridge.

Eleanor married Emil Thompson, an ex-Army captain who was later editor of The Larne Times, on October 5 1940. She wrote a witty column in the newspaper under the pseudonym Eve Wisdom, and interviewed a young Engelbert Humperdinck, who she declared “would never make it.” Emil died in 1976.

Reflecting on her birthday visit to Titanic Belfast, Eleanor said: “There is no doubt that my father loved his job and was very proud of the work he did. All the furniture for RMS Titanic was built in what we called ‘The Yard’ here in Belfast and that’s what my father oversaw!

“When I watch James Cameron’s Titanic or visit Titanic Belfast – I look out for the woodwork, including the famous staircase, fireplaces and panelling as I know that’s what my father worked on! He used to come home smelling of varnish and paint.

“He even travelled on board Titanic to Southhampton but had to return to Belfast as Olympic, her sister ship was on the stocks. He was fortunate he had to return – or otherwise I may not have been born in 1916 and wouldn’t be celebrating my 100th birthday at Titanic Belfast!”

Eleanor’s eldest son Peter, who travelled from Australia to be part of the celebrations, added: “It only seems fitting to celebrate my mother’s milestone birthday at Titanic Belfast, Northern Ireland’s most iconic building, given our family’s connection to RMS Titanic and Harland and Wolff.”

Chief executive of Titanic Belfast, Tim Husbands MBE, said: “It is a very special occasion to have 100th birthday party here at Titanic Belfast, but this is especially true for Eleanor as the daughter of Chief Interior Draftsman who travelled on board the ship.

“At Titanic Belfast, we have welcomed guests including Her Majesty the Queen but our staff equally loved having Eleanor visit and hearing her stories about her father and the Yard at Harland and Wolff.”

Among her many visitors was the Bishop of Connor, the Rt Rev Alan Abernethy, and the Rev Harold Sharp.