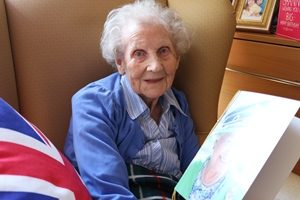 Eileen with the sixth birthday card she has received from the Queen!

A very happy birthday to Mrs Eileen Nutt, a parishioner of St Simon’s, Belfast, who is 106 today (May 13)!

Eileen has had a lifelong connection with St Simon’s – indeed, as Priest-in- Charge the Rev Raymond Moore pointed out, the actual church was only consecrated 86 years ago, so Eileen is older than it!

Eileen is originally from the Donegall Road area and now lives in Adelaide House, Adelaide Park, where her son Ernie, a young pup at 87, is also a resident. 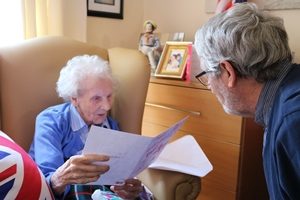 The Rev Raymond Moore, Priest-in Charge of St Simon’s, where Eileen has been a lifelong parishioner, helps her read her cards.

She grew up in a three-story house in Donegall Avenue which remained in the family for many years. She was married, and had a daughter Margaret as well as her son Ernie, but Ernie explained that his father had gone to England or Scotland during the Depression and was never heard of again.

During the war Eileen worked in a children’s nursery and for many years was a clerical officer in Bannon’s furniture shop before going back to nursery work in her later years. Ernie said she also looked after her brothers, one of whom had been on a ship which was torpedoed during the war and he took oil into his lungs, affecting his later health. 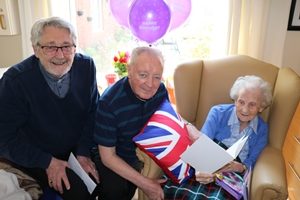 Birthday girl Eileen with the Rev Raymond Moore and her son Ernie (87).

Eileen was delighted to receive her sixth birthday card from the Queen – always a very special one as she is a big fan of Her Majesty and the Royal family. A wedding photograph of William and Kate hangs on her bedroom wall, and Ernie said an early birthday gift of a Union Jack cushion had Eileen out of bed and showing it to all her neighbours late into the evening!

“She loves the Queen,” Ernie said. “She is the first down on the Lisburn Road with her wee flag every Twelfth!” 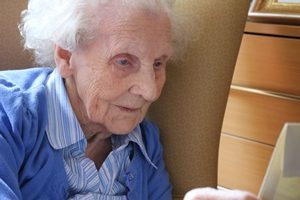 A great fan of Linfield, Eileen knows all the team’s songs.  She loves singing and Ernie says really enjoys the regular visits of ‘the Music Man’ to Adelaide House. Her voice is frail, but she was very happy to ‘conduct’ and mime the words of Happy Birthday, perhaps saving her voice for the party that afternoon.

Eileen in her youth was also a great Irish dancer.

Raymond helped Eileen open her many cards on the morning of her birthday. They included cards from Her Majesty’s Lord Lieutenant for Belfast, Fionnuala Jay-O’Boyle, who was planning to attend the afternoon party, and the Bishop of Connor, the Rt Rev Alan Abernethy. 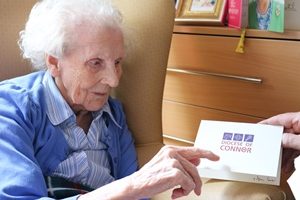 A special message for Eileen from the Bishop of Connor.

She also received a card from the Mothers’ Union of which she is a member.

Eileen said it was great to be 106 and she was looking forward to her birthday cake and her big party with family and friends.