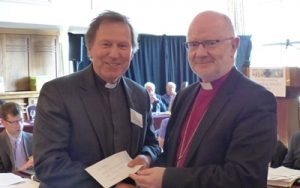 Connor Diocese had a number of winners in the Church of Ireland Central Communications Board’s 2016 Communications Competition, including the diocesan website and magazine.

St Anne’s Cathedral picked up three top prizes, including ‘Most Engaging Blog’ for the Dean of Belfast’s twice weekly online blog, and awards also went to Connor Mothers’ Union for its In Touch publication, and to the United Parish of Ballynure and Ballyeaston for its parish website.

The results of the competition for the best newsletters/magazines, websites and innovative use of social media by parishes, dioceses and church organisations were announced at General Synod on Saturday May 14 by the Most Rev Pat Storey, Bishop of Meath and Kildare and Chairman of the Central Communications Board.

The competition was run by the Church of Ireland Press Office but externally and professionally judged. This year, the prizes in each category were generously sponsored by Ecclesiastical Insurance.

There was praise for all the entrants for their efforts in communicating within their own contexts in each category, with convincing evidence of communication work of a high standard across the island.

In the Diocesan websites category first prize went to Meath and Kildare (www.meathandkildare.org) with Connor runner up. The judges said: “As with all online experiences, ‘less is more’.  The winner and runner–up each had ‘simplicity and clarity’ along with a contemporary design and feel.

In the Diocesan magazines category n:Vision (Dioceses of Derry and Raphoe) took first prize, and the runner-up was the Clogher Diocesan Magazine.

Connor Connections was highly commended. The judges said: “The entry featured ‘great stories’ – especially a report on a parishioner taking the initiative to help people affected by the Nepal earthquake. Photography was used effectively to break up the content.”

In the Parish websites category the United Parish of Ballynure and Ballyeaston (www.theunitedparish.org.uk) was highly commended.

St Anne’s Cathedral picked up first prize in the Other/Affiliated organisation magazines category for the Cathedral Digest which is published every other month. The judges described it as a ‘good pocket–sized publication with an easy layout and good standard of photography,’ and praised the Digest for its ‘informative and clear design with a reader–friendly format.’

Runner–up in this category was In Touch, published by Connor Mothers’ Union, which the judges found to be ‘very nicely formatted’ with a good spread of information.

In the Other/affiliated organisation websites category first prize was awarded to St Anne’s Cathedral (www.belfastcathedral.org).The website was commended for being well–maintained with ‘very clear navigation and a wealth of information.’

St Anne’s was also a winner in the Social media and blogs category which looked at how churches, church organisations and members engaged with innovative developments in social networking.  Twenty–three social media entries featured, ranging from Facebook and Twitter to Instagram, podcasts and e–zines.

A twice weekly blog by the Dean of Belfast, the Very Rev John Mann, was judged the most engaging blog (http://belfastcathedral.org/news/deans-blog),and described as a ‘worthy entry’ due to the consistency in posting new items.

A full list of the prizewinners in the Communications Competition can be found on the General Synod Website.