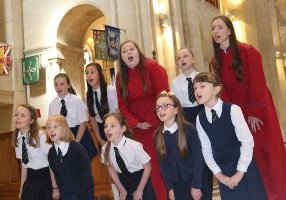 Children from Cliftonville Integrated Primary School perform during the Choir Schools Concert in St Anne’s Cathedral. Supporting them are Anna and Aoife.

St Anne’s Cathedral was filled with the sound of joyous young voices along with some beautiful instrumental music during the Choir School Concert on Sunday May 22.

Some of the pupils have progressed to the Cathedral’s Junior Girls’ and Boys’ Choirs, and members of these choirs also part in Sunday’s concert, augmenting their usual sacred repertoire with some fun songs especially for the occasion.

In an entertaining programme, representatives of the Boys’ Choir sang Lead Me Lord, and were followed by the Junior Girls’ singing The White Paternoster. Talented pianists Caity and Katie performed Dance of the Shepherd Girls as a duet and also performed piano solos. 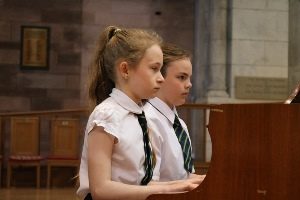 A lovely piano duet from Caity and Katie.

Tania Murphy, a member of the Senior Girls’ Choir, sang a solo Music for a While. Tania recently sang for Royalty in a concert featuring choristers from 60 cathedrals in St Paul’s in London.

The audience was spellbound by Zoe McGarry on the Irish Harp – Zoe played Rites of Man, The Last Dance, and The Musical Priest.

The concert closed with further songs from the Junior Girls and the Boys.

There were gifts for some of the children who move on this year, and a special thank you for Anne Woodfield, who is leaving the Cathedral to do teacher training.

Wishing Anna all the best in her future career, Cathedral singing tutor Catherine Harper said: “We are going to be bereft without her. She has managed to get around every discipline and she works very hard and knows the children so well.”

The Dean of Belfast, the Very Rev John Mann, expressed thanks to Catherine, to music tutor Therese Woodfield, to the girls from the Senior Choir who had helped out and to Master of the Choristers David Stevens.

“We would love this project to continue and to grow,” Dean Mann said.