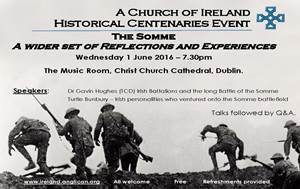 The Church of Ireland Historical Centenaries Working Group is holding an evening of presentations and an opportunity for discussion to mark the centenary of the Battle of the Somme.

This will take place in the Music Room of Christ Church Cathedral, Dublin, at 7.30pm on June 1. The keynote speakers will be Dr Gavin Hughes, a Visiting Research Fellow at Trinity College, Dublin, who will speak on ‘Irish Battalions and the long Battle of the Somme’, and the well-known writer and historian Turtle Bunbury who will speak on ‘Irish personalities who ventured onto the Somme battlefield’.

The talks will be chaired by a senior UK Government official and will include an opportunity for questions and answers with the speakers, followed by refreshments. All are welcome to attend.

The all-island aspects of the Battle of the Somme and its legacy will be explored. Dr Hughes will focus on the military exploits of the Volunteer ‘Service’ battalions of the 36th (Ulster) and 16th (Irish) Divisions, alongside the veteran ‘Regulars’ and will consider their military impact through documentary evidence and surviving archaeological traces. Dr Hughes hopes to offer thoughtful and useful conclusions regarding the painful progress of Irish units on the Somme with an active discussion on their attendant horrific casualty rates.

Turtle Bunbury’s presentation will consider a wide range of individuals who either ventured onto the battlefield or flew above it both on July 1 and through the latter stages of the long drawn-out battle.

Amongst those whose lives he will discuss will be Sir William Orpen and his experiences as an artist; Woodbine Willie as a padre to the troops; DD Sheehan, a nationalist MP at the Somme; the Irish air aces who circled high above the battlefield and the Easter Rising veterans who died at the Somme.

Admission to the event is free. It would be helpful if those wishing to attend would indicate in advance by emailing: press@ireland.anglican.org