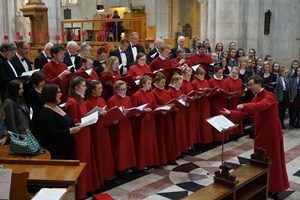 The concert in honour of The Queen’s 90th Birthday was a great climax to the Belfast Cathedral Music Festival.

Belfast Cathedral’s 2016 Music Festival ended on Saturday May 28 with a superb concert in honour of the 90th birthday of Her Majesty The Queen.

The nave was comfortably filled for the concert which took place in the presence of Her Majesty’s Lord Lieutenant of Belfast, Mrs Finnouala Jay-O’Boyle CBE and Mr Richard Jay.

This festival finale was hosted by St Anne’s in conjunction with the Ulster Society of Organists and Choirmasters.  The Cathedral Choir was joined by the Cantate Domino Consort and the Junior Choir of Victoria College Belfast. 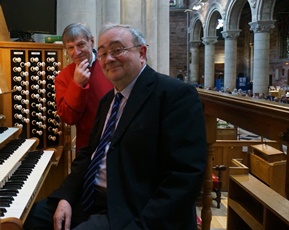 Brian Hunter, who is no stranger to St Anne’s, directed the Cantate Domino Consort in a number of pieces, several of which were directly linked to Royal occasions.

Victoria College Junior Choir played a valuable role in providing not only two pieces on their own, but in joining the other two choirs in Parry’s I was glad, which finished the concert, contributing the important and highly timely Vivat Regina.

St Anne’s choir sang the popular Zadok the Priest in impressive style and organ works punctuated the choral works. The Dean of Belfast, the Very Rev John Mann said: “It was a suitable end to a wonderful and very successful festival of music.”

The Festival began the previous Sunday, May 22, when St Anne’s was filled with the sound of joyous young voices along with some beautiful instrumental music during a concert by pupils from the Cathedral’s three Choir Schools – Edenbrooke, Sacred Heart and Cliftonville Integrated. Visit http://www.belfastcathedral.org/news/item/1206/joyful-voices-and-music-at-choir-schools-concert/ for a full report and photo gallery. 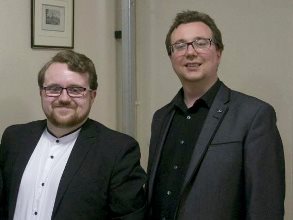 The second concert of the Festival took place on Wednesday May 25 when Conor Breen, former member of the Cathedral Choir and NI Opera Young Artist, performed a recital of atmospheric music from Saint-Saëns, Hahn, Finzi, Mahler and Strass. Full report at: http://www.belfastcathedral.org/news/item/1210/passionate-performance-by-conor-breen-at-the-cathedral-music-festival/

On Thursday May 26 the audience was guided to the north side of the choir stalls for an organ recital by Master of Choristers, David Stevens. The full effect of the organ is enjoyed from this position, and with the curtains around the console removed, everyone was able to get a good view of the performers – which included Aimee, Anna, Rachel and Therese from the St Anne’s Cathedral Choir. See http://www.belfastcathedral.org/news/item/1211/recital-by-master-of-choristers/ 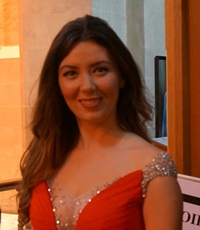 Soprano Andrea Delaney’s recital on May 27 reflected well her title On a Wing and a Prayer, and as well as the audience sitting in the choir stalls, it drew people in through the big glass doors from the street to listen at the back for a while.

Dean Mann commented on ‘the amazement that we all felt that someone can stand alone and sing for us, without interruption, for more than an hour, with such beautifully performed songs building one upon another before the final Mozart Alleluia.’ Full report at:  http://www.belfastcathedral.org/news/item/1212/on-a-wing-and-a-prayer-andrea-delaney/