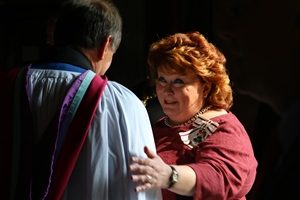 The Dean of Belfast, the Very Rev John Mann, greets Her Majesty’s Lord Lieutenant for Belfast Mrs Fionnuala Jay-O’Boyle before the Evensong to celebrate the Queen’s 90th birthday.

This was very much an occasion of celebration. The service opened with the singing of the National Anthem and later Cathedral organist Ian Barber, Master of the Choristers David Stevens and the Choir presented a rousing version of the popular coronation anthem, Parry’s I was glad. 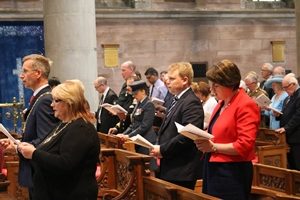 Service to celebrate the Queen’s 90th birthday in St Anne’s.

There were special prayers and hymns suitable for the occasion. Scripture was read by Sir Nigel Hamilton and by Lord Mayor Kingston.

You can visit the Cathedral Photo Gallery of the occasion.