Candles and prayers in St Anne’s for Orlando victims 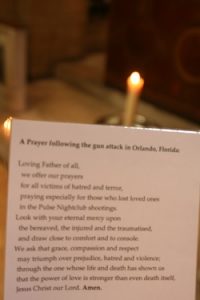 Visitors to St Anne’s Cathedral can light a candle or say a special prayer for the victims of the gun attack in Orlando at the weekend.

A single candle is burning in St Anne’s Cathedral, Belfast, in respect for the people who died and were injured in a shooting at a nightclub in Orlando on June 12.

Prayers for the victims are being said at services throughout the day, and specially written prayers are available in the Chapel of the Holy Spirit, where those wishing to reflect on the atrocity can light a candle or spend time in silent prayer.

Authorities in the US have said the attack at Pulse nightclub, by an American-born man who had pledged allegiance to ISIS, was the deadliest mass shooting in the United States and the nation’s worst terror attack since 9/11.

The Rev Mark Niblock, Dean’s Vicar, said: “In view of the atrocities that continue to be perpetrated by terrorists in our world today, and particularly the Orlando attack yesterday, a space for reflection and prayer is once again being established in the Chapel of the Holy Spirit in St Anne’s Cathedral.

“A single candle will burn all day and throughout the coming days, and visitors are invited to light their own candles around it to show solidarity with those who suffer at this time. Prayers have been prepared for the use of those who come to sit or kneel as we think of all victims of violence.”