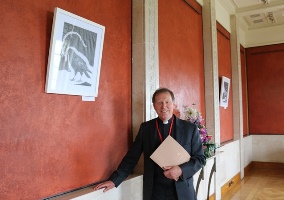 The Dean of Belfast views Eve Parnell’s exhibition in the Long Gallery at Stormont.

The Dean of Belfast was invited by artist Eve Parnell to write some words for a catalogue to accompany Eve’s exhibition, Souls of the Slain, currently running in the Long Gallery, Stormont.

Although the Dean, the Very Rev John Mann, was not able to be present at the launch of the exhibition on June 6, he has visited to see Eve’s work at first hand.

Souls of the Slain – the title comes from the Thomas Hardy poem and the exhibition marks the 2016 centenaries – is a series of drawings on tissue paper inspired by the Battle of The Somme and the Easter Rising.

Dublin artist Eve first met Dean Mann when she presented a pencil drawing of Sir John Lavery’s St Brigid to Prince Charles and the Duchess of Cornwall during their visit to St Patrick’s Church in Donegall Street last year.

Each of the eight drawings in Souls of the Slain measures 34 x 43cms. “My choice of pencil on tissue paper represents honesty and fragility, the pencil is plain, not ‘fancy’. Pencils have been used by artists for centuries, this represents a link, tradition and continuity, pencil is accessible, whereas tissue paper is fragile, expendable, often overlooked, representing our consumer society and the fragility of life,” Eve explained. 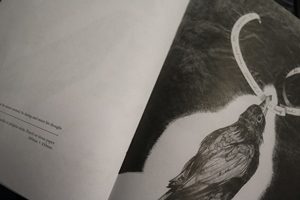 One of the images reproduced in the Souls of the Slain catalogue to which the Dean of Belfast has contributed.

“Looking at the experience of soldiers in the trenches in Europe and the Easter Rising, I have created a response in the form of a series of drawings with selections from the poetry of Wilfred Owen, Patrick Pearse, Thomas Hardy, Rupert Brooke, Dora Sigerson Shorter and others.”

The focus of each of the drawings is the Raven.

In his words of introduction to Eve’s work in the exhibition catalogue, which are printed in both English and Irish, Dean Mann reflected on the use of the Raven in the images.

“These black birds have been seen in middle-eastern culture as harbingers of woe, if not death; interestingly, not so much from an Old Testament perspective, but in a wider indigenous context,” he wrote.

“In the Old Testament it is recorded that Noah released a raven from the ark first, but it was the dove that was his second messenger who returned with the olive shoot.  Ravens fed Elijah at the brook Cherith, during the time of the drought in Israel and in Psalm 147, God himself feeds the young ravens who call upon him.  So the crow and raven has come to lose something of their unpleasant associations of feeding on carrion and the young and vulnerable life of other creatures.”

The Dean commented that in her work, Eve has these birds ‘haloed in light and themselves in a variety of non-aggressive poses, imperilled even, carrying in their beaks as twigs to the nest, the drawings on tissue paper – itself ephemeral, expendable, of little substance – and streamers of poetry.’ 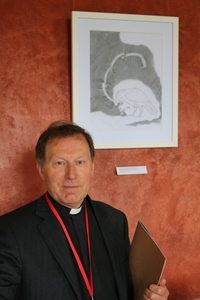 Dean John Mann with one of Eve’s artworks.

The Dean described Eve’s work as ‘arresting.’ “Her artistic conception of the Somme introduces motifs that produce resonances which on the one hand are restorative, but on the other, painful and heart-rending.”

Other contributors are Anne Stewart, curator of Fine Art, National Museums of Northern Ireland, who, in concluding her foreword writes: “It is in the delicacy and grace of her drawings that Eve Parnell most closely approaches the true spirit of commemoration.”

The third contributor, The Most Rev Eamon Martin, Roman Catholic Archbishop of Armagh, wrote: “Respectful remembering holds the past, present and future delicately together in trust, faith and hope. Eve’s poignant and vivid drawings successfully do that.”

The exhibition was endorsed in Eve’s catalogue by Deputy First Minister Martin McGuinness and the Rt Hon Jeffrey Donaldson MP.

At the invitation of Dean Mann, and by kind permission of Eve Parnell, it is hoped St Anne’s Cathedral will be able to play host to Souls of the Slain for a period during the summer.