Pick up your summer issue of Connor Connections 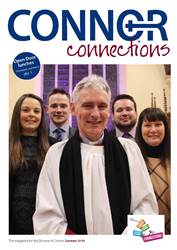 Connor Connections Summer 2016 issue is out!

The summer issue of Connor Connections is out and is available free of charge to pick up in all parishes across the diocese.

This issue, which features a picture of the new Dean of Connor, the Very Rev Sam Wright, on the cover, gives a great insight into life in one of the Church of Ireland’s largest dioceses.

The work of the Diocesan Development Team features prominently, with the Church Army’s ‘Open Door Lunches’ for homeless people in Belfast; Equipped Training for Children’s Ministry Leaders laid on by Children’s Project Development Officer Jill Hamilton, and reports of the varied and exciting events organised for young people by Youth Officer Christina Baillie and the Engage Connor Youth Council.

There are features on the service in St Anne’s Cathedral to mark the 75th anniversary of the Belfast Blitz, the introduction of Canon James Carson as Minister-in-Charge of the Lower Shankill Team Ministry; Jordanstown curate Jonny Campbell-Smyth’s visit to Chile with SAMS a couple of awesome birthday celebrations, including one for a lady who is 106!

The Rev Gary Millar, rector of Ahoghill and Portglenone, now an international ambassador for Primary Immune Deficiency, speaks candidly about an illness he has lived with for more than three decades, and there are some fond farewells to clergy who have retired in recent months.

Anyone looking for something to do in the summer can find out about an exhibition in Bushmills which remembers those who died in the Two World Wars and portrays life for those who stayed at home in those difficult years, or read about the Summer Music series in St Patrick’s, Coleraine, the new guided tours at Belfast Cathedral, or sign up for Streetreach in north Belfast!

Pick up your free issue of Connor Connections this weekend. If you live outside the diocese, the magazine will shortly be available to download in pdf format from the Connor website, or you can request a copy by emailing dco@connor.anglican.org.