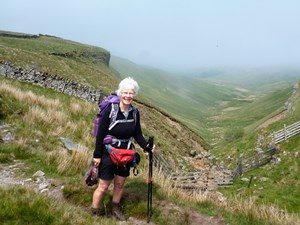 Nonie Scott, a churchwarden at Lisburn Cathedral, has completed an awesome 192 mile trek across England to raise funds for local charity Abaana!

Nonie, who is a keen walker, followed the famous Wainwright’s Coast to Coast route, starting from St Bees on the Cumbrian Coast right across England to Robin Hood Bay on the Northumberland Coast.

The biggest challenge was that the route involved crossing the mountains of the Lake District and the Pennines and traversing the Yorkshire Dales and the North York Moors. In total the route climbs some 8,800 metres – the height of Mount Everest!

Nonie said: “The weather for most of the walk was very hot but temperatures dropped for the last couple of days and this made walking easier. I met a lot of lovely people during the walk and passed through some very interesting places, such as Kirkby Stephen (where the annual Appleby Horse Fair was in full swing) and Richmond, a large medieval town.

“It was amazing to finally arrive at Robin Hood Bay on the North Sea coast, after 15 days ‘on the road.’” 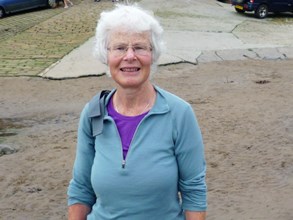 Nonie at ‘journey’s end’ at Robin Hood Bay, on the Northumberland coast.

Nonie said she wanted want to thank all those who so generously sponsored her. All the money raised is going to Abaana, a local charity, based in Bangor, Co Down and which has been working to help children living in poverty in Africa, principally in Uganda, for the last 18 years.

Abaana has built 13 primary schools, currently provides sponsorship for some 1,350 children to receive an education and works with children living rough on the streets of Kampala in Uganda. (To find out more go to www.abaana.org).

A spokesperson for Abaana said: “We are so grateful to Nonie for undertaking such an amazing challenge in aid of the work of Abaana. The funds raised will make a genuine and lasting difference to the lives of boys and girls living in poverty in Uganda.  A huge thank you to all those who supported and sponsored Nonie.”