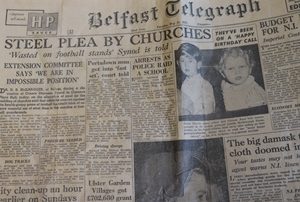 Steel ‘wasted on football stands!’ Connor Synod hits the headlines in the Belfast Telegraph on May 27 1952!

A copy of the Belfast Telegraph, unearthed during a spring clean, prompts a reminder of the days when diocesan synods made front page news!

Not only does the Telegraph of Tuesday May 27 1952 report on a debate at Connor Synod when it was argued that steel was being ‘wasted on football stands’ when it should be used for church halls, it also reveals that Belfast’s oldest church had been given a reprieve from amalgamation.

That particular church was St George’s which this year celebrates its bicentenary – and a proposal that it should be amalgamated with the Parish of St Anne was rejected following a two hour debate.

The main heading on the paper’s front page is: ‘Steel plea by churches.’  The introduction reads: “Dr DS McIlhagger, of Belfast, during a discussion at Connor Diocesan Synod in Clarence Place Hall, to-day, on the allocation of steel for the building of churches said that while he was not against the health-giving game of football he could think of no more wasteful use of steel than in the erection of football grandstands.”

It appears that during the year the ‘Extension Committee’ had only been granted one licence by the Government – and that was for Cloughfern.

“This places your committee in an impossible position to deal with the demands for accommodation in the new housing areas and in the provision of places for worship in the parishes where church buildings were destroyed by enemy action in 1941,” the committee’s report to Synod stated.

The newspaper goes on: “Dr McIlhagger said steel had been used for the building of factories which after a short period had gone on short-time. Greyhound racing tracks and been rebuilt and refurbished.

“Down-town stores had been rebuilt and redecorated in lavish style. Yet they could not get steel for a few paltry church halls.

“The tithe they were offering God was an extremely small one.”

Dr McIlhagger argued that it was a ‘good investment’ to build churches, and asked how children could ‘reverence God’s house’ if a room was used for both secular and religious purposes.

He is quoted as saying: “We need not blame the Government. We must blame ourselves. Go out as missionaries. The Church has money, it has plans. It is ready to start building. 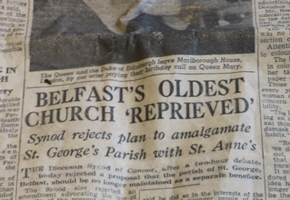 A debate about St George’s Parish Church was also on the front page.

The article on the future of St George’s states that the parish church was ‘on trial’ during the lengthy debate, in which the then Bishop of Connor, the Rt Rev Dr Charles King Irwin, said the key question was ‘weighing up sentiment again realism.’

The motion to amalgamate St George’s with St Anne’s was put by Mr R A Corscadden with an amendment proposed by the Rev G Wilson, Armoy. Interestingly one of those to speak for St George’s was the Hon Terence O’Neill MP, a future Prime Minister of Northern Ireland.

Just to put this newspaper in a historical context, an infant Prince Charles and Princess Anne, and separately a very young Queen Elizabeth  II and Duke of Edinburgh, are pictured on the front page having visited  Charles and Anne’s great grandmother, Queen Mary, at Marlborough House for her 85th birthday!

And as a little aside, perhaps the good fortunes of the Northern Ireland team in France at this very time may owe a little something to the investment in steel for football grandstands back in 1952!

Thanks to Church of Ireland Press Officer Peter Cheney for the loan of this old copy of the Belfast Telegraph.