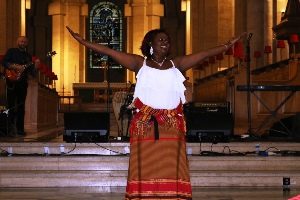 St Anne’s Cathedral was flooded with colour, culture and sounds on Thursday night as it hosted WelcomeFest for the first time in a fantastic celebration of Refugee Week. Photo Gallery.

Around 400 people of all ages attended the event, which was organised by the Red Cross, Belfast Friendship Club and NI Council for Refugees and Asylum Seekers (NICRAS).

The free musical event featured a diverse line-up of local artists including Ugandan drummer Donna Namusake, whose opening set was bursting with energy, and Sri Lankan beatboxer Julius, who created some fantastic sounds using only his voice. Also taking to the stage and specially cleared floor space at the front of the Cathedral was Indian dance troupe Josh, Wilson Magwere singing music from Zimbabwe, Anglo-Colombian duo Mauricio Velezsierra and Heidi Heidelberg, and the energetic all-women Samba band Chidambaran. 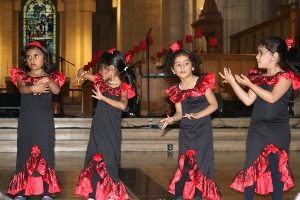 There was home grown talent in the form of front women Fiona O’Kane (RunawayGo) and Frances Mitchell (Loris) teaming up to perform some acoustic cover songs, while world champion drum major Alan McBride, who also sings, performed with Mark Humphries and Roy Fulton.

The many children in the audience were enthralled by the skills of a host of circus acts, performing feats never before seen in St Anne’s Cathedral, while outside they had the opportunity to have a go at art activities provided in the carpark by Wheelworks, a youth art organisation. 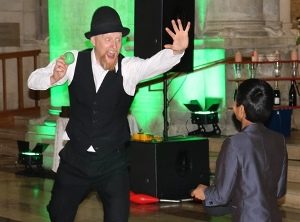 The SOS Bus provided refreshments and face painting, and while the weather outside was not kind, there was plenty to see and do indoors to keep everyone entertained.

A variety of organisations working with and supporting refugees and asylum seekers were on hand to offer advice.

The Dean of Belfast, the Very Rev John Mann, said WelcomeFest was a great title for what the evening was all about – ‘celebrating talent, experiencing diversity, promoting the richness of the wide range of Northern Ireland’s society today.’

“Things are not always easy, individuals and families may be isolated, integration takes time and effort, but may this night open our eyes and ears to fresh sights and sounds, help us make new friends and bring a smile and raise spirits all round,” the Dean said. 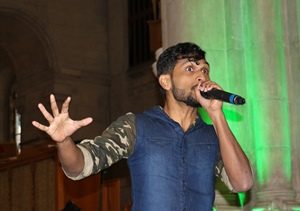 Melanie Holmes from the Red Cross’ refugee support team in Belfast said: “We wanted to show people the positive side of our work. We see a lot of hardship and sadness in our jobs supporting vulnerable refugees and asylum seekers, but each person we meet is an individual with their own story, talents and contribution to make to our society.”

Melanie extended thanks to Beyond Skin whose amazing artists put on such a great night’s entertainment.