The Rev John Anderson dedicates the statue of Robert Quigg VC in the presence of Her Majesty the Queen and the Duke of Edinburgh.

On Tuesday June 28 Her Majesty the Queen visited Bushmills to unveil a statue of World War One hero Rifleman Robert Quigg, a lifelong member of Billy Parish Church, Diocese of Connor.

There to welcome Her Majesty was the rector of Billy and Derrykeighan, the Rev John Anderson, who dedicated the statue in the presence of the Queen and the Duke of Edinburgh. 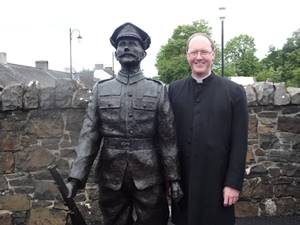 The Rev John Anderson with the statue of Rifleman Robert Quigg VC, which stands in Bushmills.

This very special event was organised by the Robert Quigg VC Commemoration Society, whose chairman Leonard Quigg, hon treasurer of Drumtallagh Parish, is a great great nephew of Robert Quigg.

Rifleman Robert Quigg received the Victoria Cross, the highest military honour awarded for valour in the British Commonwealth, for his actions at the Battle of the Somme.

His medal citation reports that: “…..Early next morning, hearing a rumour that his platoon officer was lying out wounded, he went out seven times to look for him under heavy shell and machine-gun fire, each time bringing back a wounded man. The last man he dragged in on a waterproof sheet from within a few yards of the enemy’s wire. He was seven hours engaged in this most gallant work, and finally was so exhausted that he had to give it up.” 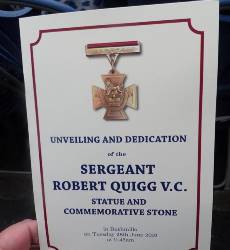 The last casualty that Quigg saved was Robert Matthews, from the village of Mosside, less than six miles from Bushmills. Sadly, in all those seven hours Quigg never found his platoon commander.

To commemorate Robert Quigg’s bravery in this the centenary year of the Battle of the Somme, the Society appointed David Annand to create his sculpture. David has worked on several high profile public sculptures of famous people, including Robert Dunlop in Ballymoney.

Her Majesty unveiled the statue just days before the 100th anniversary of the start of the Battle of the Somme. The Queen and Duke of Edinburgh were on a two-day trip to Northern Ireland which also included visits to the Giant’s Causeway, Portrush Golf Club, and Coleraine from where they travelled by steam train to Bellarena in Co Londonderry. 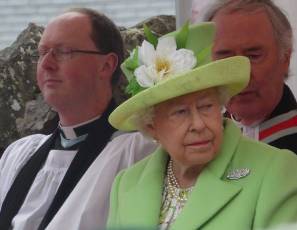 The Rev John Anderson was sat beside Her Majesty the Queen at the dedication of the statue of Robert Quigg.

At the short service of dedication of the statue to Robert Quigg in Bushmills, John was assisted by the Rev Victor Dobbin, retired Chaplain General and a former Chaplain to the Queen.

Representatives from Billy Parish were among the invited guests.

Robert Quigg died in 1955 and is buried at Billy Parish Church. John said his grave had become such a focus of attention that signs had to be erected directing people to it.

“He was a very private man, but he is a real local hero,” John said. Billy Parish will be taking part in the 2016 European Heritage Open Days on September 10-11 and will be hosting an exhibition about Robert Quigg. 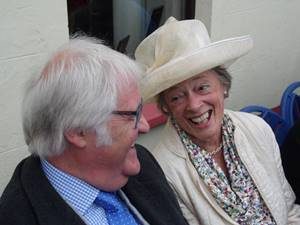 Billy parishioners Pam Traill and Ian Page were among the guests at the dedication in Bushmills.

John said Tuesday’s service of dedication in Bushmills had gone very smoothly. “I was not formally introduced to Her Majesty but she nodded a hello when she arrived and when everyone was seated she looked over to me as if to say ‘Get on with it!’

“I sat beside her and brushed shoulders with the Duke of Edinburgh, and I also met First Minister Arlene Foster.”

John added: “It was a great occasion and I was glad to be part of it. I will always remember when I look at the statue of Robert Quigg that it was I who dedicated it in the presence of the Queen.”