Cathedrals and churches invited to support ‘Peal for the Somme’ 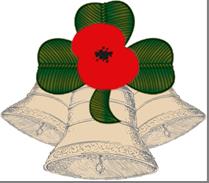 The Royal British Legion in the Republic of Ireland is inviting cathedrals, churches and communities across the island of Ireland to participate in ‘A Peal for the Somme’ – an event to help mark the centenary of the Battle of the Somme.

All denominations are invited to toll a funeral bell for 10 minutes on July 1 commencing at 7.30am, marking 100 years to the minute that officers blew their whistles ordering their men to leave the safety of their trenches and cross ‘no-man’s land’ and, or alternatively, at 11am to coincide with the start of the international ceremonial event at the Thiepval Memorial in France.

The Royal British Legion is hosting and supporting commemorative events at war memorials across the UK, France and Ireland, including Dublin, Cork, Waterford, Wexford and Limerick to mark the centenary. Many of these commemorative events are being timed to coincide either with the exact moment that soldiers left their trenches 100 years or at 11am when at the Thiepval Memorial in France (the site of the battle),  political leaders and military representatives of all nations involved in the conflict will participate in a major televised commemoration.

Among the participants are the UK, France, Ireland, Australia, New Zealand, Canada, South Africa, India, West Indies and Germany. The honour of representing the United Kingdom, in whose Armed Forces over 200,000 Irishmen served, has been awarded to the 1st Battalion of the Irish Guards.

The Royal British Legion’s Head of Remembrance, The Rt Rev Nigel McCulloch KCVO, said: “This year we are asking communities to host or take part in events to commemorate those who fell at the Battle of the Somme, which has come to symbolise the tragic scale and futility of modern industrialised warfare.”

The President of the Royal British Legion in the Republic of Ireland, Major General David O’Morchoe CB CBE, commented that the sacrifice of these young men, and that of so many communities across the island of Ireland, was as relevant today as ever. “In this centenary year we pay special tribute to their Service and their Sacrifice,” he said.

The Battle of the Somme took place from July 1 to November 18 1916 and has come to symbolise the enormous losses and dreadful conditions of the First World War. As a principle custodian of Remembrance in Ireland, The Royal British Legion is encouraging the country to commemorate the sacrifices of those who fell at the Battle of the Somme by holding their own Remembrance event. Almost every community across the 32 counties of Ireland was deeply affected by the loss of men who had gone to fight at the Battle of the Somme, especially those areas which saw heavy losses from the ‘Pals’ battalions.

The Pals battalions were groups of friends, teammates in sports clubs and colleagues, who had joined together, fought together and often died together. The Royal Irish Fusiliers and the rugby players of the 7th Battalion Royal Dublin Fusiliers were key examples.

This Remembrance event is one of many taking place internationally and will be a chance for people to acknowledge the sacrifice of those from all nations, and in Ireland, of those from all communities who died.

Lt Col Ken Martin, Chairman of the Royal British Legion in the Republic of Ireland said: “The Peal for the Somme is intended as a community event to promote remembrance of those of all nations who made the ultimate sacrifice. It is also an important opportunity for an inclusive reflection on the cost of war and the price of peace, and for Ireland to show solidarity with other nations in acknowledging our common losses”.

The British Legion was established in Ireland in 1925 by Irish veterans returned from the Great War and for over 90 years has acted as the principle custodian of Remembrance for Ireland’s fallen of both World Wars. The charity provides care and support to all British Armed Forces veterans and their families in Ireland who are in need and preserves the memory of those who did not return.

Churches wishing to contribute in the “Peal for the Somme” can register their participation at https://www.eventbrite.ie/e/a-peal-for-the-somme-tickets-21477944109

For more information about the Somme commemorations contact ROI@britishlegion.org.uk.