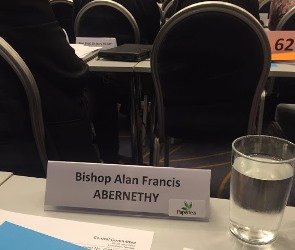 Bishop Alan Abernethy represented the Church of Ireland on the WCC Central Committee.

The Bishop of Connor, the Rt Rev Alan Abernethy, spent a week in Trondheim, Norway, where he represented the Church of Ireland at the World Council of Churches Central Committee meeting.

Bishop Alan was elected to the committee when he attended the 10th Assembly of the WCC in Busan, Republic of Korea, in November 2013. He was in Geneva in July 2014 for his first Central Committee meeting

The overarching theme of the meeting in Trondheim was ‘Pilgrimage: Discerning the Landscapes Together.’

The Central Committee meets four times between assemblies – every other year – and there is an executive committee which meets at least once a year.

Bishop Alan said “The central committee carries out the visions and policies of the assembly and determines the strategies to do so; it also aims to deepen fellowship between the member churches, bringing greater ecumenical coherence and providing opportunities to consult with one another on issues of mutual concern.” 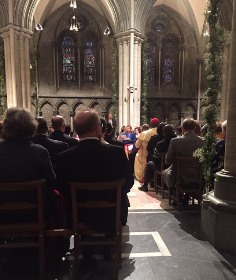 The opening service in Trondheim Cathedral.

He said the opening service of the Central Committee had been very moving. “Trondheim Cathedral is very beautiful. We sang songs from different parts of the world, and the liturgy was from all around the world. Everyone said The Lord’s Prayer in their own tongues. I loved it.”

During his week in Norway Bishop Alan also joined Afternoon Prayer at Bakke Church, and attended a reception at the Archbishop’s Palace, hosted by the mayor of Trondheim.

But most of the week was taken up with meetings. The Central Committee is sub-divided into smaller committees focused on different areas, including nomination, finance, programme, policy reference and public issues. Bishop Alan was on the public issues committee.

Each committee debated matters covered by its remit and then reported back to the main plenary, where the statements prepared were either accepted by majority – or returned to the relevant committee for redrafting.

Statements issued by the public issues committee included religion and violence; the situation in Papua New Guinea, the situation in Palestine and the Middle East, and a statement on Brexit. You can view Bishop Alan answering some questions on Brexit – the referendum took place mid-way through the WCC meeting – on Facebook at https://www.facebook.com/ecumenicalyouth/posts/1213476168677347

Some of the statements issued by the committee can also be read on the WCC website. http://www.oikoumene.org/en/central-committee-2016

“In total we issued seven statements,” Bishop Alan explained. “We were trying to get a sense of the view of the world church on some of these issues.” 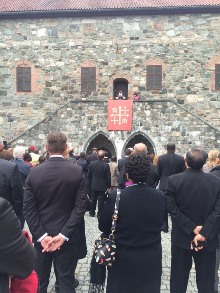 Bishop Alan and other delegates attended a reception in the Archbishop’s Palace, hosted by the Mayor of Trondheim. With the Mayor is Dr Agnes Abuom, Moderator of the WCC Central Committee.

The WCC Central Committee has 120 members, and is also attended by staff and advisors. Each committee has 16 members, but the numbers were higher, again due to advisors and staff. Bishop Alan said most of the plenaries were conducted in English, but there were headsets available for use and interpreters were also on hand.

The debates in the committee had been far reaching, the Bishop said. “We learned more about the world, particularly figures on religion and violence, facts relating to children and suffering.  We heard frightening stories of how people are living in Syria and the Middle East. To hear how they are living out their faith puts some of our problems into perspective.”

The issue of climate change was also on the agenda, with stories of people from islands in the Pacific which soon will disappear into the sea.

Bishop Alan spoke frequently in his own committee and also addressed the full Plenary on several occasions. “There were some very difficult issues arising in the public issues committee. It is remarkable that we were able to come to a consensus,” he said.

“Every day was very intense, we worked from early morning until late with not a lot of free time.”

This was Bishop Alan’s first visit to Norway, and Trondheim is located in the north. “It didn’t get dark until 2am and was bright again at 3am so it was hard to get to sleep,” the Bishop said. He did not get much opportunity to take in the sights of this coastal town, which has a large university population, a big IT business community and is also quite industrial.

But he did have the chance to renew acquaintances made in Busan and Geneva. “These are very important friendships,” the Bishop said.

During the course of the week there was an Anglican meeting – Bishop Alan was the only Irish representative – and a Regional meeting of all the European representatives.

“The Europeans were shocked at the Brexit vote, but the overwhelming feeling was sadness that the case for Europe had all been negative,” he said.

Of the WCC meetings, he said: “I always come back inspired by the witness of some Christians in difficult places and challenged by the breadth of the church, the amazing mix of people from different places in the world yet somehow we are connected in one family despite our cultural differences. We do see the world at times through a very narrow lens.”