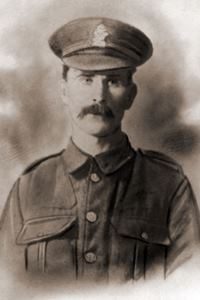 Thomas Hawthorne from Magheragall, one of eight brothers who signed up during World War One. His name is to be added to the Lisburn City War Memorial

As the sacrifices of those who died, were wounded or bereaved in the Battle of the Somme 100 years ago are remembered, one Magheragall parishioner reflected on his own family’s huge sacrifice.

On Friday, July 1, at an early morning service of remembrance at the War memorial in Castle Street, Lisburn, Cyril Hawthorne heard that it is the intention of the city council to add the names of his grandfather Thomas and his great uncle Albert to the City’s war memorial.

Grandson Cyril has a wartime cutting from a newspaper and it reads: “Many instances of patriotism of family have come to light in the North of Ireland but few if any can excel that of Mrs Hawthorne of Magheragall, Lisburn, who has given no fewer than eight sons to the army…. The record of her family is a splendid one and we congratulate her on giving eight astute sons to the service of the King.”

Of the 10 sons of William and Elizabeth Hawthorne, eight of them enlisted at the outbreak of the Great War. Charlie, Thomas, Albert, Hugh, Joe, Billy, Adam and George signed up, six to the Royal Irish Rifles, part of the 36th Ulster Division, one to the Royal Engineers and one to a Scottish Regiment. 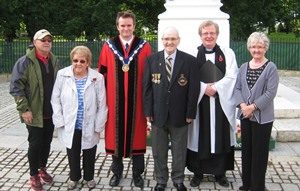 Not only did eight sons enlist but William and Elizabeth saw their son-in-law William Moore join the 11th Royal Irish Rifles as a Farrier.  At the time, there was great talk that they would be home for Christmas, but of course that was not the case.

The sons are listed on the Roll of Honour in Magheragall Parish Church and Thomas and Albert, the two brothers who paid the ultimate price, are named on the Parish War Memorial.

Cyril shared a little of the story of his grandfather Thomas Hawthorne. Cyril says he went to his work on the trams in Belfast and never came home – he had signed up and was in Ballykinlar. When Thomas joined up he was 34-years-old and a father of four children, William, Thomas, Sarah, and Maisie. Cyril also remembers his grandmother Mary with great pride as she was left to rear the family on her own.

Magheragall Rector the Rev Nicholas Dark, in his capacity as branch chaplain to Lisburn Branch Royal British Legion, conducted the service of remembrance at the War Memorial in Lisburn which began at 6.45am on July 1. The service included the sounding of whistles to remember the men going over the top at dawn on the fateful morning in 1916.

The service drew people from far and near and Cyril met up with two of his sisters Robena Rimmer (nee Hawthorne) and Joyce McComb (nee Hawthorne), parishioners of Enniskillen Cathedral who had travelled to be at the service.

The family was surprised to meet cousin Verner Moore who had arrived from Australia, grandson of William Moore, 11 Royal Irish Rifles, and brother-in-law of their grandfather Thomas Hawthorne.