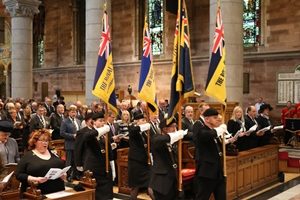 The arrival of the Standards for the service of Commemoration on the centenary of the Battle of the Somme.

St Anne’s Cathedral, Belfast, was packed on Sunday July 3 for a moving service to commemorate those who died or were injured or bereaved at the Battle of the Somme 100 years ago.

The sermon was preached by the Dean of Belfast, the Very Rev John Mann, who said that 1,250,000 who died in the battle was ‘a number too great to contemplate, too high to imagine.’ He said that at the service commemorated ‘not a statistic but a human tragedy, a catastrophe.’

The names of 17 sets of brothers from Ulster who died on the first day of the battle were read out, and the citations of four members of the 36th (Ulster) Division who were awarded the Victoria Cross for acts of valour at the Somme were read by their descendants. 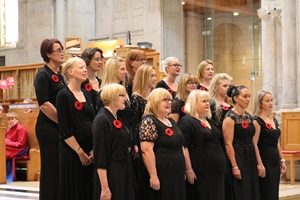 The service was attended by First Minister Arlene Foster, Her Majesty’s Lord-Lieutenant of the County Borough of Belfast, Mrs Fionnuala Jay-O’Boyle CBE and the Lord Mayor of Belfast, Alderman Brian Kingston.

The Northern Ireland Military Wives Choir sang the poignant Bring Him Home from Lès Miserables, accompanied by members of the Band of the Royal Signals. 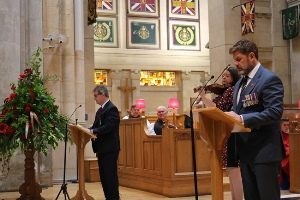 The names of the so called Band of Brothers, the 17 sets of brothers from Ulster killed on July1 1916, were read by Lt Col Kingsley Donaldson WW1 Centenary Committee Secretary and Rt Hon Sir Jeffrey Donaldson MP, Committee Chairman, to accompaniment by Tracey McCrory. These losses are representative of the wider suffering of families throughout Ulster and Ireland.

The members of the 16th (Irish) Division were also remembered in recognition of their heroic service and sacrifice at Guillemont and Ginchy in September 1916.

In a foreword in the Order of Service, the Rt Hon Sir Jeffrey Donaldson wrote: “This is a day of great significance in particular to the people of Northern Ireland and all the counties of Ulster as a result of the actions of the 36th (Ulster) Division at Thiepval, who lost over 5000 soldiers killed and wounded and were awarded four Victoria Crosses for acts of gallantry.” 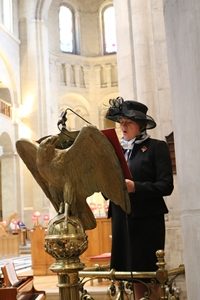 In his welcome printed in the Order of Service, Dean Mann said: “In some sense the Somme defines the sacrifice of the 36th Ulster Division, and we hope that this will be duly observed today.  However, this day is not only a marking of the story of that particular Kitchener division drawn from the nine counties, crushing though the loss of life and injured minds and bodies that it suffered may be, but is a commemoration of all whose lives were wrecked, whose hearts were broken, whose pain was unbearable, that were part of the 141 days of that appalling human catastrophe that we know of as ‘The Somme’.”

The service included an Act of Remembrance and the laying of wreaths at the War Memorial. Representatives of churches in Northern Ireland lead prayers specially written for this Somme commemoration.

This service was organised by St Anne’s Cathedral in conjunction with the Northern Ireland First World War Centenary Committee.