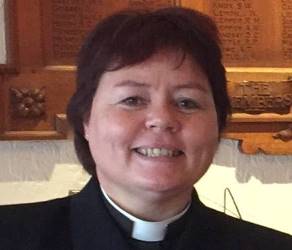 The Rev Lynne Gibson says she is excited about her move to St Mark’s in Ballymacash, Lisburn.

Lynne, who will be instituted as rector on Wednesday September 7, said she had been struck by the ‘incredible warmth of the people’ of the parish.

“They seem to have such a commitment to service right across the parish, there is an idea that everybody in the parish has a role to play, and there is a lot going on,” she said.

Lynne, 50, is currently curate assistant of the Parish of St Mark, Dundela, in the Diocese of Down. A past pupil of Omagh Academy, she studied German and Biblical Studies at the University of St Andrew’s.

She worked in the civil service in the Social Security Agency for 18 years, spending the first six and half of these in England before being transferred back to Northern Ireland, where she was based in Belfast.

Lynne’s home parish was St Finnian’s, Cregagh, where she was a parish reader for a time and helped with the BB. “There were a lot of people who saw what was coming before I did!” she said.

She studied at the Church of Ireland Theological College and was ordained in 2010. She has been curate assistant in Dundela since then.

Looking to the challenges ahead in Ballymacash, Lynne said: “The parish wants to build up the youth and Sunday School. That is a big challenge for every church. Young people have so many other opportunities and demands on their time. They need to feel church is relevant, and also want to feel valued for who they are in the present not just who they will be in the future.”

Lynne added: “It is exciting to be moving on but there is a genuine sadness to leave behind the people of St Mark’s, Dundela, because after six years you have made strong connections with people, often at pastorally difficult times.”