Launch of Souls of the Slain exhibition at St Anne’s 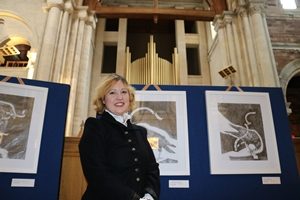 Artist Eve Parnell at the launch of her Souls of the Slain art exhibition in St Anne’s Cathedral.

Artist Eve Parnell travelled from Dublin to speak at the launch of her exhibition Souls of the Slain in St Anne’s Cathedral, Belfast, on Thursday July 14. (Watch the video).

The exhibition, which consists of a series of eight pencil drawings on tissue paper, commemorates the 2016 centenaries, and was first on display in the Long Gallery, Stormont, during June.

Eve was introduced by the Dean of Belfast, the Very Rev John Mann, who contributed a foreword in the exhibition catalogue.

In this, he described Eve’s work as ‘arresting.’ “Her artistic conception of the Somme introduces motifs that produce resonances which on the one hand are restorative, but on the other, painful and heart-rending,” the Dean wrote.

Eve explained that her use of pencil on tissue paper, a medium that is ‘expendable and sometimes overlooked’ made her work very honest.

“I cannot make mistakes. If I do I have to start again. There is no hiding. There are no theatrics. The work is very honest and very bare,” Eve said. 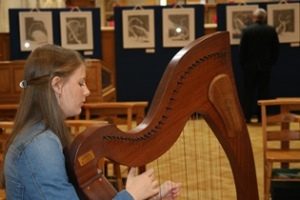 The focus of this exhibition is the Raven. Eve has looked at the experience of soldiers in the trenches in Europe and the Easter Rising, and created a response in the form of a series of drawings with selections from the poetry of Wilfred Owen, Patrick Pearse, Thomas Hardy, Rupert Brooke, Dora Sigerson Shorter and others.”

Guests at the launch were welcomed with music played by 16-year-old Zoe McGarry on the Irish Harp.

The Souls of the Slain exhibition runs at St Anne’s until early August during normal opening hours. For further information call 028 9032 8332.