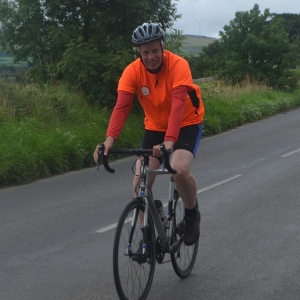 The Rev Dr Robin Stockitt will stop at both Lisburn and Belfast Cathedrals on his marathon fundraising cycle.

A Church of Ireland rector is doing a three day cycle around the eight Church of Ireland cathedrals in Northern Ireland and Donegal to raise funds for a mental health awareness charity and for his parish hall.

The Rev Dr Robin Stockitt, rector of St James, Donagheady, Co Tyrone, will be arriving at Lisburn Cathedral around 5pm on Saturday August 6, and stopping by St Anne’s Cathedral between 9.20am and 9.40am the following day.

Dr Stockitt lost his mother to suicide 30 years ago, and 50 per cent of the money raised in this 240 mile cycle marathon will go to the charity Cycle Against Suicide, which raises awareness about mental health.

He will be joined on the trip by 13 friends from the Donemana area. The group – who meet up twice a week to cycle – will set off on Friday morning (August 5). Their itinerary includes visits to the Church of Ireland cathedrals in Derry/Londonderry, Raphoe, Enniskillen, Clogher, Armagh, Dromore, Lisburn and Belfast.

Dr Stockitt says the friends belong to different Christian churches in Tyrone and funds raised will be split evenly between their chosen projects. The first is to renovate Donagheady Parish Hall and bring it up to modern day standards, making it a venue for all to use. The second is Cycle Against Suicide.

Dr Stockitt said his interest in mental health stems from the loss of his mother, 30 years ago this week, and from contact with parishioners who have also been bereaved through suicide.

He said Northern Ireland has the highest suicide rate in the United Kingdom at 16.5 per 100,000. This means that in the 18 years since the 1998 Good Friday peace agreement, more people have died through suicide than were killed in the 30 years of ‘The Troubles’.