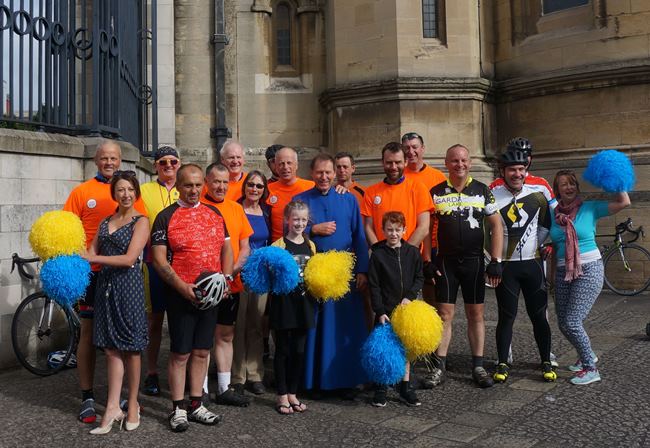 Rev Stockitt and his fellow cyclists and supporters were met by the Dean of Belfast, the Very Rev John Mann, when they called in to St Anne’s Cathedral on Sunday.

A colourful group of fundraising cyclists called into Lisburn Cathedral and St Anne’s Cathedral in Belfast over the weekend.

They were led by The Rev Dr Robin Stockitt, rector of St James, Donagheady, Co Tyrone, who organised a three day cycle around the eight Church of Ireland cathedrals in Northern Ireland and Donegal to raise funds for a suicide awareness charity and for his parish hall.

Dr Stockitt lost his mother to suicide 30 years ago, and 50 per cent of the money raised in this 240 mile cycle marathon will go to the charity Cycle Against Suicide, which raises awareness about mental health.

Over the weekend, the group visited the Church of Ireland cathedrals in Derry/Londonderry, Raphoe, Enniskillen, Clogher, Armagh, Dromore, Lisburn and Belfast.

They were in Lisburn late on Saturday afternoon, August 6, and cycled on to St Anne on Sunday morning.

The funds raised will be split evenly between the Donagheady Parish Hall renovation fund, and Cycle Against Suicide.