Leah publishes a book to inspire others facing difficulty 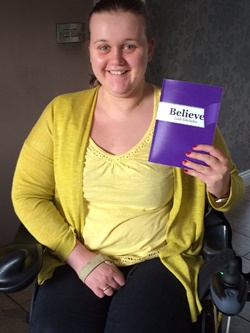 Hot off the press! Leah Batchelor with her book ‘Believe.’

Inspirational Leah Batchelor, a young woman who has defied the odds in her recovery from Locked-in Syndrome, has written a book about her experiences.

In the book, entitled Believe, Leah recalls how she was confined to a hospital bed able to move nothing but her eyelids. She felt flickers of movement returning and prayed to God for more.

Leah was just 21 when, in September 2011, she suffered a major brain stem stroke caused by an aneurysm. Her prognosis was not good and her parents Allison and Tom were told she may not survive.

Five years on she has graduated from University, passed her driving test and is now a published author!

A parishioner at St Michael’s, Belfast, Leah admitted that her faith in God was tested in the early days of her illness.

“I did very early on question God but I was so scared that I soon forgave Him and turned back to Him,” she said. “As I couldn’t talk or move, He was the only one who knew what I was feeling, thinking. At the time I could only talk to Him.”

Leah’s book chronicles her life since that fateful day in 2011. “It was very hard to write, but I started writing when I was still in hospital as at the time I’d no speech and it was my way of understanding what I’d been through,” Leah said.

“I edited these notes to create the book, but the first few chapters were really hard to write as they brought back so many unhappy memories, I could only edit a small section of this at any one time. I’ve been writing it for the last four years so I was also writing as events happened.”

Leah graduated from the University of Ulster with a 2:1 in Graphic Design last December, and at the ceremony amazed everyone with her courageous determination to walk on the stage to pick up her certificate. Since graduating, she has been doing some freelance work and is on the lookout for a permanent part-time job.

She is a Girls’ Brigade leader in St Mary’s Ballybeen, and has been helping Heather Carson, wife of the Rev Canon Jim Carson, Lower Shankill Team Ministry, to develop the Lower Shankill brand COILS (Church of Ireland Lower Shankill).

Leah is still in therapy, and travels to London to a specialist clinic once a year for a fortnight of rehabilitation treatment as no similar service is available in Northern Ireland.

A delighted Leah took delivery her first batch of copies of Believe on Friday morning, August 12.

“My hope for the book is to inspire others going through a difficult time not to give up,” she said. “Also I want doctors and nurses to read it to hear what it’s really like so they can hopefully have a better understanding of how to care for patients.”

Anyone wishing to order a copy of Believe (£7) can contact Leah directly at believe.leah@gmail.com