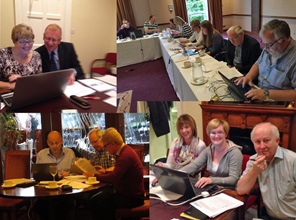 All 368 vestries in Northern Ireland are now successfully registered with the Charity Commission, following the final set of workshops in July (for the Diocese of Clogher).

The registration workshops began in September 2014 and were piloted in the dioceses of Down and Dromore and Connor.  Their parishes will be the first to take on the next step, of producing annual reports.

The Archbishop of Armagh, the Most Rev Dr Richard Clarke, thanked the select vestries for their hard work in bringing the process to this point. “The commitment of members of the select vestries as they engaged with this registration process has been remarkable, and the Church of Ireland is truly indebted to all those who undertook the task of gathering and submitting the necessary information,” Archbishop Clarke said.

The achievement is very much a team effort and the Church is grateful for vestry members who came and took part so willingly in the workshops, and also the hard work of diocesan secretaries and administrative staff in co-ordinating the process.  Other Church of Ireland bodies will be contacted as the charity regulatory authorities proceed with their schedules.

For parishes undertaking annual reporting, guidance is available at www.charitycommissionni.org.uk and Mrs Nicola Brown can be contacted for assistance on parishsupportofficer@rcbdub.org. Queries about other aspects of charitable status can be directed to Ms Joanne Richards on +353 1 4125 660 or charityreg@rcbdub.org