Some fascinating stories about a War Memorial erected in St John’s Church, Donegore, midway through World War One will be related when the parish takes part in European Heritage Open Days on September 10 and 11.

The Parish will also be displaying its new War Memorial, crated from poppies from the 2014 centenary display at the Tower of London and oak from northern France. 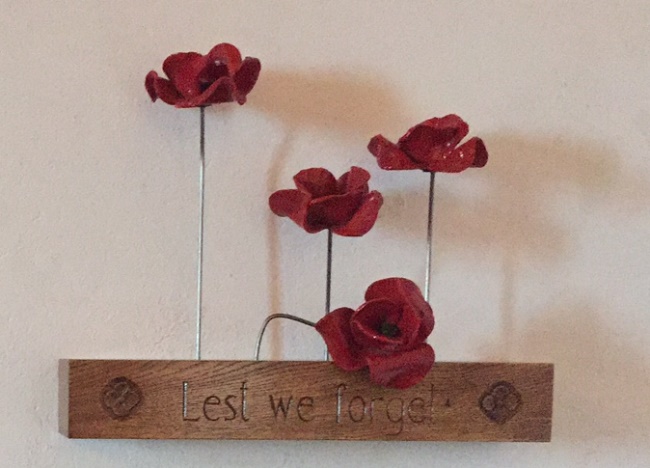 The new War Memorial in St John’s, Donegore, crafted from poppies from the 2014 centenary display in the Tower of London and oak from northern France.

As part of its European Heritage Open Days programme, St John’s will tell the stories of the men from the Parish of Donegore who served in the First World War.

For many years, on Remembrance Sunday, the poppy wreath in St John’s was laid beside a framed Roll of Honour which had been created in 1916. The Roll of Honour names 43 men, connected with the Parish of Donegore, who served their country in the Great War. It includes the Rev Charles Newell who was Vicar of Templepatrick and curate-in-charge of Donegore and who served as Chaplain to the Forces.

Parishioners have long been fascinated by the Roll of Honour and its significance, mainly because it was created two years before the end of the war and includes the names of men who returned home – such as Rev Newell. So clearly it was not a War Memorial as such.

The answer to many of the queries have now been found by new parishioner and historical researcher, Mr Michael Nugent. Michael has prepared information packs about each man named (and for three others who are buried in the churchyard but are not mentioned on the Roll of Honour) which tell about their home lives, where they served in the war, and whether they returned home or not. 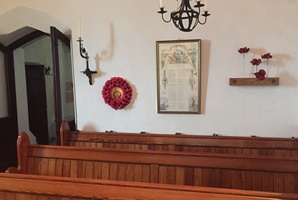 War Memorials old and new hang side by side in St John’s, Donegore.

The result is some fascinating stories (and a few even more fascinating unanswered questions). These will form the core of St John’s display on the Open Days.

The parish will also be showing its new War Memorial, created from four of the poppies from the 2014 Centenary display at the Tower of London set into a piece of oak from Northern France, in the region of some of the battles that the men of Donegore fought in.

The memorial was created by Mr Albert Patterson and is the gift of Mrs Pat MacKean.