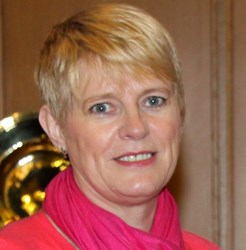 Janet Hunter, St Paul’s, Lisburn, is preparing to have her head shaved for Macmillan.

Two parishioners of St Paul’s, Lisburn, are taking the head staggers and getting their hair shaved off to raise funds for Macmillan Cancer Care.

Janet Hunter and Tina McCready both lost their mothers to cancer and are taking up the challenge of Macmillan’s Brave the Shave in memory of their mums.

The two ladies will be getting a number three all over on September 24 when the Head Shave takes place in St Patrick’s RC Church, Chapel Hill, Lisburn at 7pm.

Janet, who is soon to be commissioned as a Lay Reader in St Paul’s, said the results of her close shave would be on display when she attends the Diocese of Connor Synod just a few days after she goes ‘under the clippers!’

“I am braving the shave in memory of my mum and for all my family and friends who are fighting cancer and those in remission,” Janet said. 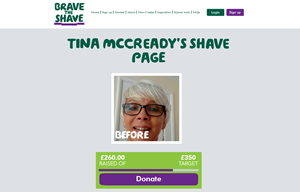 Her mother Annie McIlwaine died on June 3 this year and Tina’s mum Betty McKay died from cancer two years ago. Both were parishioners of St Paul’s.

“I am nervous about doing this, but we are doing it for a good cause, and will hopefully raise lots of money to pay for a nurse to care for a family when someone has cancer,” Janet said.

“We had a lot of help from Macmillan. Having lived with the day to day care of my mother with cancer I know what the nurses go through. It is horrendous, and how they keep cheerful the whole time I do not know.”

Janet added: “My family think I am nuts but they are backing me 100 per cent.”

To support Janet or Tina, visit bravetheshave.org.uk and search for Janet Hunter and Tina McCready.