Institution of the Rev Lynne Gibson in Ballymacash 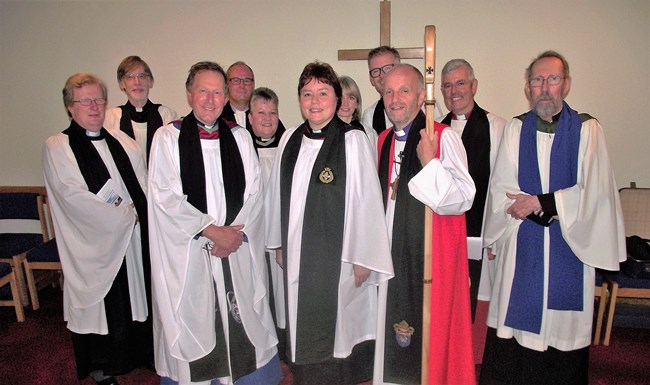 The Rev Lynne Gibson, front centre, with the Bishop of Connor to her left, Dean John Mann to her right, and clergy who attended her institution in Ballymacash on September 7. Photo: Brian Kelly.

The Rev Lynne Gibson became only the third rector of St Mark’s Church in the Parish of Ballymacash when she was instituted by the Bishop of Connor, the Rt Rev Alan Abernethy, on Wednesday September 7.

Lynne has been curate assistant at St. Mark’s, Dundela in the Diocese of Down for the past six years.  A past pupil of Omagh Academy, she studied German and Biblical Studies at the University of St Andrew’s.

She worked in the civil service in the Social Security Agency for 18 years, spending the first six and half of these in England before being transferred back to Northern Ireland, where she was based in Belfast.

Lynne’s home parish was St Finnian’s, Cregagh, where she was a parish reader for a time and helped with the BB.

She studied at the Church of Ireland Theological College and was ordained in 2010.

The preacher at the service was the Very Rev John Mann, Dean of Belfast.