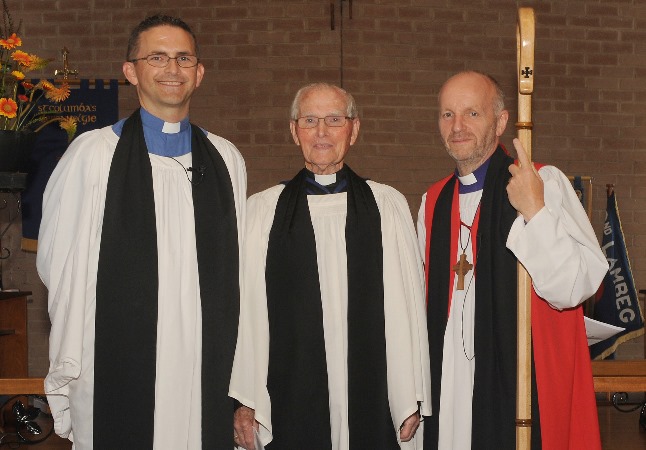 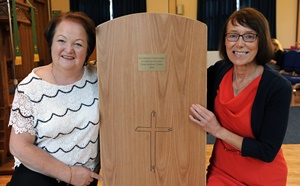 Thelma Campbell and Noreen Kavanagh (Enrolling Member) pictured at a bible trolley which they presented on behalf of the Mothers’ Union to celebrate the 50th Anniversary of St Columba’s Church.

The 50th Anniversary Service was led by the rector, the Rev Stephen McElhinney.  During this special service, an act of dedication of new church chairs and a bible trolley (a gift from the Mothers’ Union) was conducted by The Rt Rev Alan Abernethy, Bishop of Connor, who also gave the address.

John McClune presided at the organ and led the singing of hymns that included ‘Lord, for the years your love has kept and guided’ and ‘Guide me, O thou great Jehovah.’

Julia Clarke sang the solo ‘Abide with me’.  The Scripture lessons were read by Andrew Sproule and Vanessa Robinson.

During the service Derek Shuter, the Rector’s Churchwarden, gave a brief history of the church.  Among the special guests was Canon Bertram Livingston, the first rector of Columba’s Church (1963-1979).

A history of Columba’s Church

Derryvolgie Parish was created in 1963 from the adjoining parishes of Lisburn Cathedral, Lambeg and Derriaghy.  The first rector was the Rev (now Canon) Bertram Livingston, previously rector in charge of five parishes in Co Monaghan.

When he came to Lisburn, there was neither church nor land available for it.  His home was used for Sunday School and the Bible class and in January 1964, Sunday services and Sunday school commenced in a vacant shop on the Moss Road. 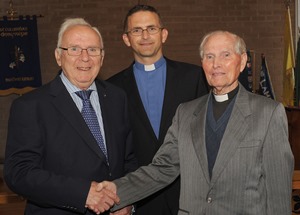 In May of that year, a hut was built by parishioners to be used until a church could be built to cater for the needs of the people moving into the area of Derriaghy, Lambeg and Lisburn.  Plans were prepared, and work commenced on the new church/hall in October 1965.

The foundation stone was laid on December 11 1965 by Sir Ivan Ewart.  The new building was dedicated by the Bishop of Connor, the Rt Rev RCH Elliott, on September 10 1966.  Also taking part were the Dean of Belfast, the Very Rev CI Peacocke, and the Archdeacon of Connor, the Ven John Mercer.  The sermon was preached by the Ven WLM Giff, Archdeacon of Meath.

The cost of the new building with furnishings was £23,500.  The parishioners contributed £6,500 and the Connor Church Extension Fund gave £7,000.  A loan of £10,000 was obtained from the Representative Church Body (RCB).  The pulpit and prayer desk came from a church in the Republic of Ireland, which had been closed, and a number of gifts were presented by parishioners. 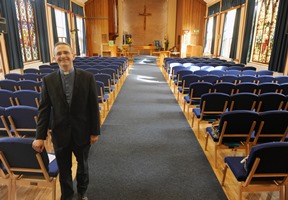 The rector, the Rev Stephen McElhinney with new church chairs which were dedicated by The Rt Rev Alan Abernethy (Bishop of Connor).

Derryvolgie achieved full parish status in January 1978.  In 1979 Canon Livingstone was succeeded by the late Canon Noel Wilkinson, who continued the work of expansion of the Parish and its activities into the wider community.  Canon Wilkinson was well respected as a talented musician, particularly in church circles.  During his Incumbency, parishioner Jack Hassard was commissioned Diocesan Reader on November 20 1980.

On Canon Wilkinson’s retirement, the Rev Chris Pollock was appointed rector on October 15 1993.  The Rev Donna Quigley was instituted here on All Saints’ Day, November 1 2004.  Dorothy Jackson was commissioned Parish Reader on May 17 2009.

Interim Ministers, the Very Rev John Dinnen and the Rev Don Gamble led Sunday worship and provided pastoral care from January 2010 until the appointment of the Rev Stephen McElhinney as priest-in-charge of Derryvolgie in September 2011 and then rector on  February 26 2015.