Crowds pack into St Anne’s for Compline on Culture Night 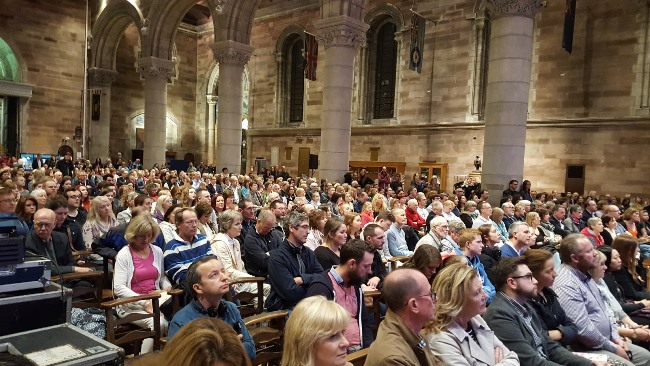 An estimated 900 people were in St Anne’s Cathedral for Sung Compline on Belfast Culture Night.

Crowds packed into St Anne’s Cathedral, Belfast, on Friday night at the city of Belfast buzzed with the sounds, sights and flavours of Culture Night 2016. Photo Album.

There was a constant flow of people through the huge glass doors during the day as a series of singer / songwriters took to the ‘stage’ at the top of the chancel steps.

Several hundred joined the choir of St Anne’s for Choral Evensong at 5.30pm and the Cathedral was full for Sung Compline at 9pm, when an incredible 900 or so people sat in silence to enjoy this ancient monastic service as the Cathedral Quarter vibrated with sound outside.

In the car park White Ink Architects endeavoured to recreate the Cathedral’s labyrinth in crates which proved a great attraction for children, and Travelwise NI hosted a Belfast Bicycle Culture exhibition.

Legacy by Lisa Donaldson, an AV performance on conflict and art, was in the Cathedral Hall, and Ghoulish Silent Movies featuring silent movies from the 1920s, were shown in The Crypt .

Events in the Cathedral got underway at 2pm with music from Killyleagh singer / songwriter Neil Foster.

Eighteen-year-old Mollie Stirling was up at 3pm. Mollie represented Ireland in the Eurovision Song Contest 2015, and her beautiful voice filled the vast space.

Iain Archer, who was on at 4pm, is a former member of Snow Patrol and he expressed his pleasure both at the great space inside the Cathedral, and at the large number of people who had come to listen to him on a Friday afternoon.

Jealous of the Birds, aka Portadown girl Naomi Hamilton, sang at 6.30pm, and it was standing room only for the Ulster Youth Jazz Orchestra who played between 8pm and 9pm.

There was plenty going on across the road in Writer’s Square, including some impressive wrestling in a big ring.  The Big Table project was cooking up a treat in Donegall Street, with free food for all, and a large table to sit, eat and enjoy the company of friends and strangers, and there was music, children’s activities and lots more in Cathedral Gardens.

All around the Cathedral, long into the night, there was music, colour, dance and art. Once again a great night for Belfast. 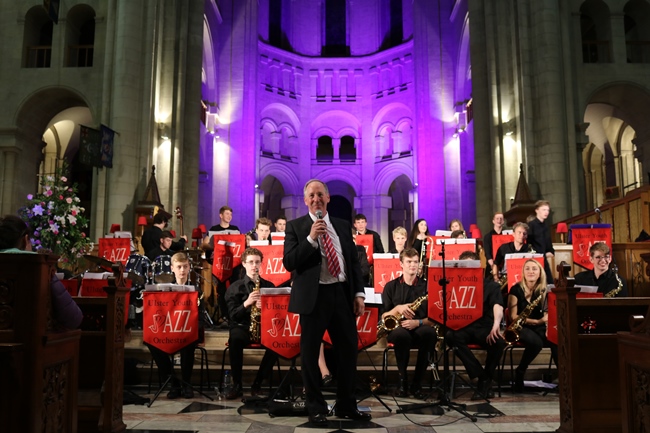 There was standing room only in St Anne’s for the Ulster Youth Jazz Orchestra’s Culture Night performance.