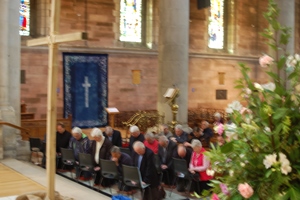 Clergy kneel to pray at the foot of the large wooden cross erected in St Anne’s Cathedral for the Divine Healing Ministries Day of Prayer for God’s Peace.

The Rev Canon David Jardine, organiser of Saturday’s Day of Prayer to find God’s Peace on September 17, said it had been a ‘tremendous day.’

The public were invited to come to St Anne’s Cathedral, Belfast, anytime between 9am and 6pm, to pray in silence. A large wooden cross was erected on the Chancel steps, and the day began with church leaders of all denominations knelt in prayer at the foot of the cross.

David said: “In the last few hours the peace in that place was amazing. People were coming and going but there wasn’t a sound.”

He estimates that between 800 and 1,000 people came in to pray in the course of the day.

“It was largely a day of silence with a short reflection on the hour and half hour,” he explained. “The reflections were led by men and women from all different religious denominations and by members of the Divine Healing Ministries team.

“We had a fantastic cross, 10 feet high, on the chancel steps, built for us by Habitat for Humanity.”

Around 200 people wrote prayer requests or statements of faith, and these were left in a basket at the foot of the cross. “We prayed over those for 10 minutes at the end of the day,” David said. “None will be opened, they are all confidential, but we will pray over them at our other healing services this week too.

“As they were leaving people said how freeing it was to be able to release their thoughts at the foot of the cross.”

The event was aimed at anyone whose peace has been disturbed, perhaps by experiences in the past, inviting them to come and spend time with God in ‘an atmosphere of godly calmness.’

David said the day provided an opportunity to “lay down any of the things that disturb, forgive those who have hurt you, say sorry where you may have hurt others and make a commitment to help build a better future for our land.”

It was originally to be held at Balmoral Park, Maze, Long Kesh, but was changed to St Anne’s Cathedral after discussions with victims’ groups.

David said he had been very happy with how the Day of Prayer had gone. “It was never meant to be an end, it is just a stage on the journey,” he said. “Our first Day of Prayer for Peace was held 25 years ago in St Anne’s on April 30 1991, coinciding with peace talks between local politicians. We have continued ever since.

“We already have a vision of where to carry on from here. We want to have four hours of prayer every day in a city centre church, beginning in January and then organise prayer on a daily basis in towns across Northern Ireland.

“We need daily prayer for a true and lasting peace in this province.”