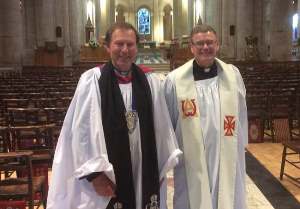 Dean John Mann and Fr Edward O’Donnell at the service on September 25 at which Fr O’Donnell was installed as an Ecumenical Canon of St Anne’s.

Speaking after his appointment in July Fr O’Donnell said:  “While this is a personal privilege for me, the honour is shared with all those who work quietly but persistently to improve and strengthen inter-church relationships.

“I recognise that for St Anne’s Cathedral community, and for the Catholic community of Belfast, that this is a significant step, perhaps even historic, but more so, I recognise the generosity of the Dean and Chapter in inviting me, as a representative of the Roman Catholic Church, to be an Ecumenical Canon.

“I look forward very much to working with them and making a contribution to the Christian life of our City.  Our common faith Jesus Christ commits us to strive for reconciliation and unity – that unity, wonderfully described by the great Lutheran theologian, Oscar Cullmann, as ‘unity in reconciled diversity.’”

Dean Mann said Fr O’Donnell is a priest for whom he has great admiration, adding: “His presence in St Anne’s will be source of strengthening the already important ecumenical bonds that we have.  Our unity in Christ is important to us both.”

In a statement on its website, the Diocese of Down and Connor expressed ‘sincere appreciation to St Anne’s Cathedral Chapter and the Dean for this symbolic gesture of communion which demonstrates an ongoing commitment to work together for peace and reconciliation, building bridges across a divided community.’

The Diocese congratulated Fr O’Donnell on his installation which it said recognised his personal contribution to ecumenical engagement over many years of ministry and the fraternal friendship extended by the clergy and parishioners of St Anne’s Cathedral to Fr O’Donnell, St Brigid’s Parish and the Diocese of Down and Connor.

The statement continued: “Building upon the strong associations between the Church of Ireland and the Catholic Church, visibly manifested in the 1998 joint partnership between St Peter’s Cathedral and St Anne’s Cathedral, this historic appointment strengthens further our common mission to witness to Christ and the promotion of reconciliation, peace and unity.”

Fr O’Donnell is a native of Magherafelt.  He studied in St Malachy’s College, Belfast, and St Kieran’s College, Kilkenny.  In June 1976 he was ordained priest for the Diocese of Down and Connor, and recently celebrated his 40th anniversary as a priest.

After ordination he was appointed Chaplain to Belfast City Hospital, then, while curate in the Parish of Drumbo, he was the first Catholic chaplain in Hydebank Young Offender’s Centre.  In 1982 he was appointed Bishop’s Secretary by Bishop Cahal Daly, a post he held for eight years.

After a short curacy in Antrim town, Fr O’Donnell was appointed Parish Priest of Newtownards and Comber and in 2002 he was transferred to be Parish Priest in St Anne’s, Finaghy.

In 2010 Bishop Noel Treanor appointed him as Parish Priest of St Brigid’s, Belfast, an appointment he continues to hold.  He serves on a number of Diocesan Committees and is a member of the Board of Directors of Restoration Ministries.

A group of protestors staged a peaceful demonstration outside the Cathedral during the installation service.

**The Statutes of the General Synod of the Church of Ireland state that the Dean and Chapter of St Anne’s Cathedral, having consulted with the Bishop of Down and Dromore and the Bishop of Connor, may appoint up to three Ecumenical Canons.

A Cathedral’s Ecumenical Canon may say or sing Morning or Evening Prayer or the Litany; read Holy Scripture; deliver an address and assist at occasional services.  An Ecumenical Canon holds office until they resign from the office or cease to be a full-time minister or accredited preacher. 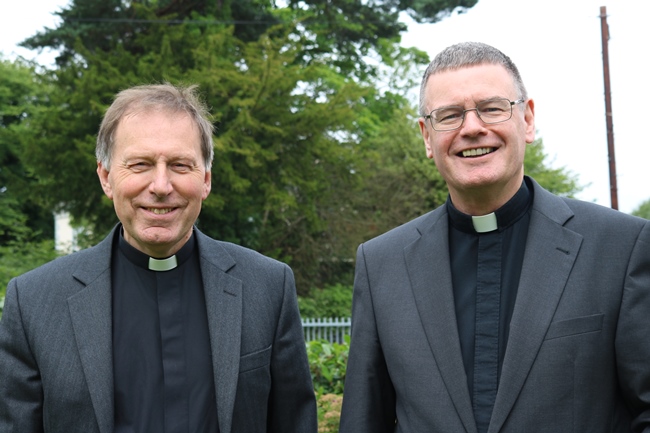