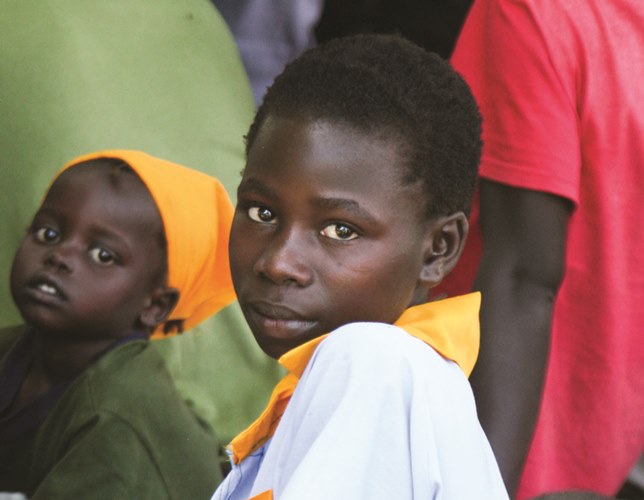 This young girl, a pupil at Mongo Primary School, featured on the cover of Connor Connections in February 2010. Renewed fighting means her future and that of all our friends in Yei, is under threat.

Bishop Hilary of Connor’s partner diocese of Yei has been forced to flee to Uganda along with this family and staff as civil unrest continues to threaten lives in South Sudan.

At Connor Synod on September 28, the Bishop of Connor, the Rt Rev Alan Abernethy, revealed he had learned only that morning that Bishop Hilary had once again become a refugee. 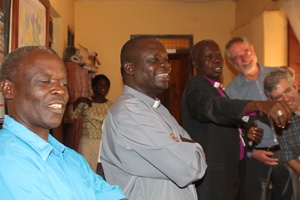 Happier times. Bishop Hilary and Diocesan staff sharing laughter with Archdeacon Stephen Forde and Dr Frank Dobbs, who were part of a team which visited Yei in January 2013.

Archdeacon Stephen Forde, who has visited Yei several times since the partnership agreement was signed in 2007, appealed to Synod ‘to hold Yei, Bishop Hilary and the people we have got to know’ in their prayers.

The latest news from Yei comes via Church Mission Society Ireland (CMSI) who have several global partners in South Sudan.

CMSI reported that increased tensions and political in-fighting had been sparked by a confrontation between different factions in Juba, the capital of South Sudan in early July.

“Life has become increasingly challenging with a breakdown in law and order, confusion politically, insecurity across the nation, transport and communication links badly affected and inflation spiralling out of all control.

“There are shortages of the most basic necessities and mobile and internet connections sporadic at best and in many places non-existent.

“It is impossible to keep up with the catalogue of atrocities and human misery. For many, life has become a matter of survival on a day to day basis, with a desperate search for places of safety, for food and water. In towns there are acute shortages of food and clean water. Shops are empty, fuel has run out.”

CMSI reports that Yei town has been very badly affected by the instability.

“Rumours of armed groups roaming the countryside are causing great fear. Shooting incidents in the town are a common occurrence. Ambushes on the road have effectively stopped imports and public transport.

“Bishop Hilary with the other church leaders in Yei have appealed to the UN for emergency food relief. In the countryside around Yei there are many reports of attacks at night, homes burnt, people being killed, property looted.

“Refugees fleeing the countryside around Yei have chosen to use tracks through the bush to cross the border to Uganda or DR Congo.”

CMSI said the commissioner of Morobo County, a man the organisation has had close contact with for many years, was ambushed when travelling in a government convoy with bodyguards. He was injured but escaped, others were killed.

In an email written on August 29, Bishop Hilary revealed that all primary and secondary schools, Yei Teacher Training College and the Bishop Alison Theological College were all closed, with teachers and families having fled to refugee camps or  ‘deep into rural areas where currently they live under huge forest cover in the jungles of Yei River State.’

Bishop Hilary managed to send an update this week, despite the challenges of no mobile network and intermittent internet.

In it he said:

“As I write, there are more than 200 families displaced from Dam residential area south of town to the church compound. We have no food to give them and our facilities cannot take them all. We are worried because of cholera outbreaks that always follow congested humans living in a small area with no proper sanitary facilities.

“We urgently need humanitarian intervention with food and non food materials like water, mosquito nets, ORS, etc. The Church leaders in Yei have sent out their appeal. But I doubt if any assistance will come from OCHA or the humanitarian organisations since all roads to Yei are blocked by insurgents.

“The medical outlets in town cannot provide services. All staff have fled and there is no medicine around. Only Yei Civil Hospital operates at very reduced levels.” 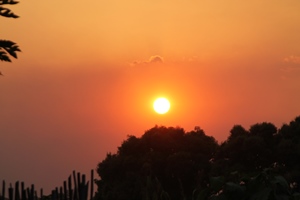 The sun sets over the bush around Yei town. Many have had to flee through the bush to seek safety in neighbouring countries or hide in fear under its jungle canopy.

Bishop Hilary said he is concerned that the banks are hardly operational and that with the spiralling inflation South Sudanese pounds are almost worthless. Many of the diocesan staff have already left Yei to resettle their families in refugee camps across the borders.

CMS Ireland supported the Bishop and two of his key staff to travel to Arua, Uganda, to make plans from there for supporting people in Yei.

A team from Lisburn Cathedral had been due to visit Yei in July. That trip had to be cancelled just days before the team was due to depart after renewed trouble broke out in South Sudan.

A full copy of the CMSI update from all its partners in South Sudan can be downloaded here.