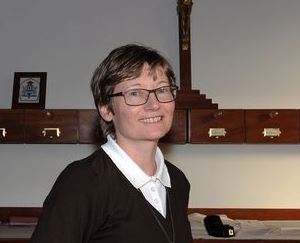 Sr Martina Purdy will speak in St Anne’s Cathedral about her journey from journalism to Holy Orders on October 17.

Martina will share on her journey from a ‘dream job’ as a BBC News journalist to her life now as an Adoration Sister, which she has described as truly ‘living the dream’.

Worship will be led by the music group from West Church, Bangor. Personal prayer and anointing with oil will be available at this service.

Born in Belfast and raised in Canada, Martina Purdy started in journalism in 1991 and initially worked as a journalist with the Irish News and Belfast Telegraph.  She was a political correspondent with BBC Northern Ireland between 1999 and 2014, when she announced her decision to enter her new vocation with the Adoration Sisters.