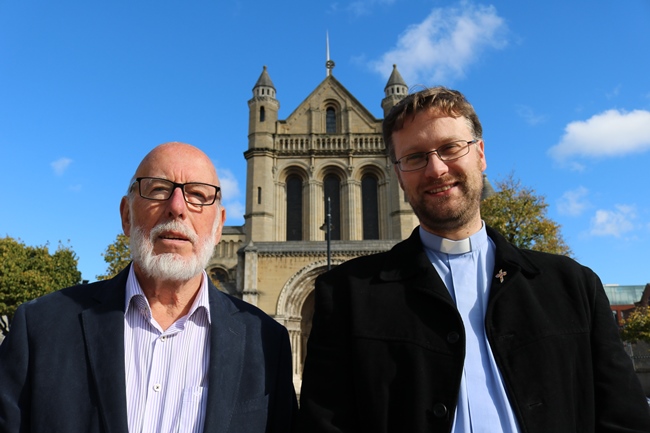 They may be miles apart geographically, but Agherton Parish Church, Portstewart, and St Anne’s Cathedral in Belfast are also remarkably close!

The Dean of Belfast, the Very Rev John Mann, recently announced the historic appointment of two Lay Canons to serve in St Anne’s. One of the new Canons is Mr Robert Kay MBE, who has been a member of Agherton Parish since he and his wife Carol moved to Portrush 10 years ago.

Mr Kay recently retired as lay honorary secretary of the Diocese of Connor, a role he had occupied for more than 30 years.  He also served on the Representative Church Body (RCB – the governing body of the Church of Ireland), the RCB Executive and was until very recently chair of the plans committee of the RCB.

But Mr Kay is not Agherton’s only link with St Anne’s. The Rev Stephen Fielding, rector of the Church of John the Baptist in Portstewart, is a Minor Canon in the Cathedral. Minor canons are appointed by the Cathedral primarily to undertake the role of cantor at Evensong, and Mr Fielding is one of six Minor Canons in St Anne’s.

And the Rev Mark Niblock, a former curate of Agherton Parish, is now Dean’s Vicar in Belfast Cathedral! Mark was curate assistant in Agherton from his ordination in June 2008 until his move to St Comgall’s, Rathcoole, in May 2012. He took up the position of Dean’s Vicar at St Anne’s in May this year.

Mr Kay, 76, a retired Chartered Building Surveyor and Chartered Architectural Technologist, was awarded an MBE in 1999 for services to architecture. He said the Dean’s phone call inviting him to be a Lay Canon at St Anne’s had come ‘out of the blue!’

“I was aware that other cathedrals had Lay Canons, but when the Dean rang I could not believe it,” he said. “I was delighted and honoured and I said yes immediately.”

This is an honorary position, but Mr Kay and the other new Lay Canon, Mrs Myrtle Kerr, will both have a dedicated ‘Seat’ in St Anne’s.

Mr Kay said: “It is just coincidental that three people connected to Agherton are now also connected to St Anne’s, but it is lovely that this link has been established and is growing.

“I would love to see lots of Agherton parishioners at the service of installation of Lay Canons in St Anne’s on Sunday January 15.”