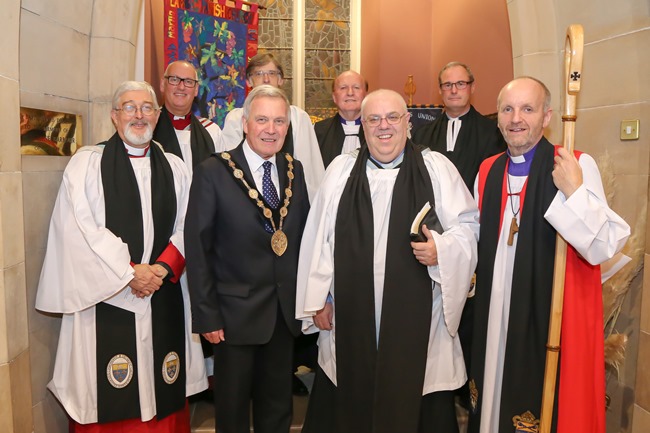 At the service of institution in Lambeg are, back from left: The Ven Dr Stephen McBride, Archdeacon of Conor; The Rev Clifford Skillen, Bishop’s Chaplain, The Rt Rev Ferran Glenfield, Bishop of Kilmore, Elphin and Ardagh, who preached; the Rev Canon William Taggart, Registrar. From, from left: The Rev Canon John Budd, Rural Dean; The Mayor of Lisburn and Castlereagh, Councillor Brian Bloomfield, MBE; The Rev Eddie Coulter and the Bishop of Connor, the Rt Rev Alan Abernethy. Photograph: Norman Briggs.

The institution of the Rev Edmond (Eddie) Coulter as rector of Lambeg Parish Church took place on Thursday October 13.

Eddie was instituted by the Bishop of Connor, the Rt Rev Alan Abernethy. Preacher at the service was the Rt Rev Ferran Glenfield, Bishop of Kilmore, Elphin and Ardagh.

Eddie grew up in Lisburn and was a member of Lisburn Cathedral when called to Ordination in 1984. He did his training at the Church of Ireland Theological Institute in Dublin and in 1987 was ordained in Connor Diocese.

In 1992 Eddie returned to Connor Diocese as rector of Upper Falls, Belfast, and in 1997 moved to Milltown Parish in Armagh Diocese. He remained rector there until 2003 when he moved to Dublin as Superintendent of Irish Church Missions and senior pastor of Immanuel Church.

Eddie is married to Hazel, and they have three children, David who is an occupational therapist based in London, Andrew who is training in physiotherapy in Aberdeen and Anna, currently studying music at Maynooth.

Eddie said he and Hazel were delighted to ‘come home’ to Lisburn and to Connor.

“We really enjoyed our time in Dublin,” he said. “Immanuel Parish has been very different from any parish I have been in before with a lot of training, church planting and other things, but I feel very happy to be coming back to Connor and to parish life and to maybe doing some of the things I have learned here in my new parish.”

Eddie’s main hobby is supporting Manchester United. “I am a great fan. My late dad, who was also Eddie, was Chief Scout for Manchester United in Northern Ireland through the Alex Ferguson years,” he revealed!

At the service on Thursday night, Mr Victor McDonald read the Old Testament lesson, the Epistle from Ephesians was read by Mr Davood Mahmoodnezhd, and the Rev David Martin did the Gospel Reading.

Following the service, supper was served in the Church Hall. 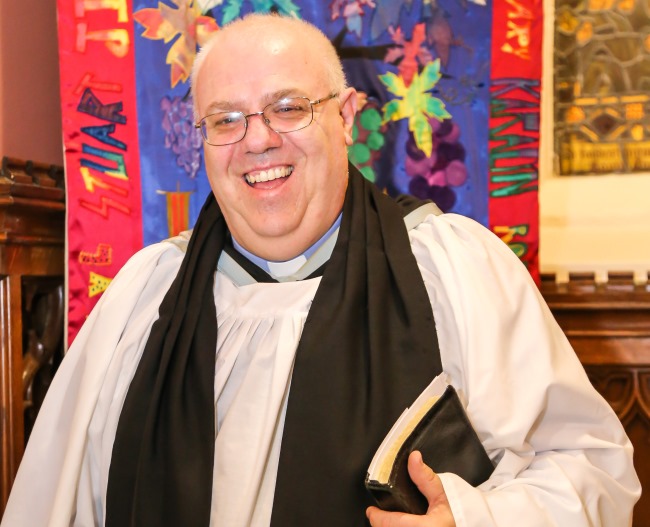 The Rev Eddie Coulter at his institution in Lambeg. Photo: Norman Briggs. 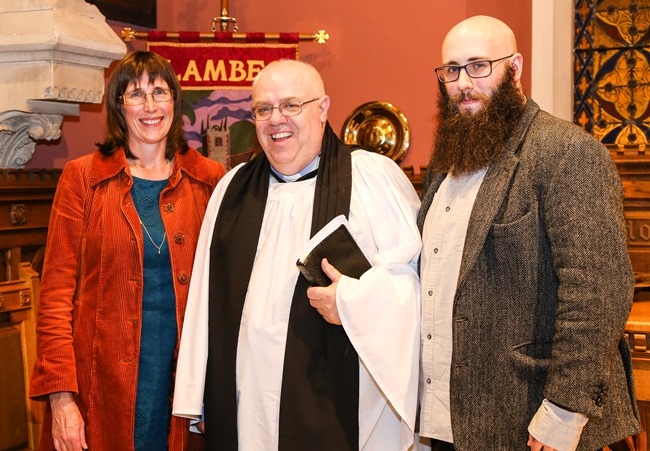 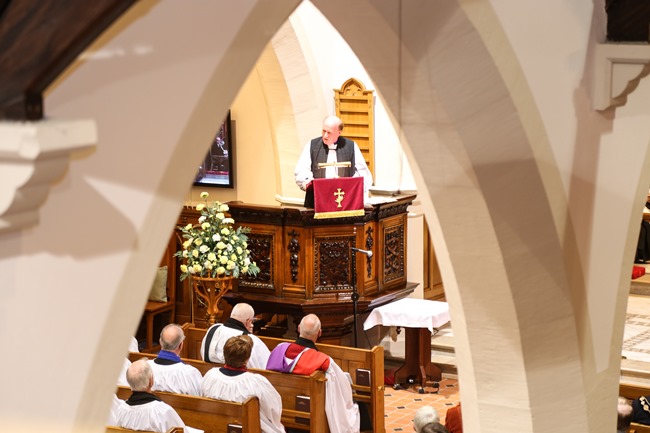 The Rt Rev Ferran Glenfield, Bishop of Kilmore, Elphin and Ardagh, preaching at the service of institution in Lambeg. Photo: Norman Briggs.