Getting into the rhythm in Glenavy!

The theme was ‘The Big Demolition’ and at both venues the children and their leaders enjoyed a rhythmic afternoon inspired by special guest James from Fun with Drums. 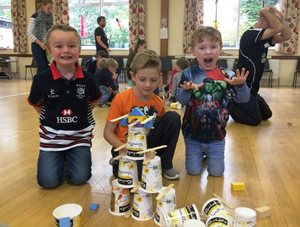 James led a warm up session and a workshop for each age group. The kids were great at keeping in time and following all James’s instructions and showed themselves to be very rhythmic indeed – there are definitely a few future drummers in the making!

As well as Fun with Drums, Kids Big Adventure featured the usual mix of on stage songs, drama and puppets. The drama this year told the story of Joshua and the walls of Jericho and some of the children volunteered to get dressed up in costumes to help bring the story to life. 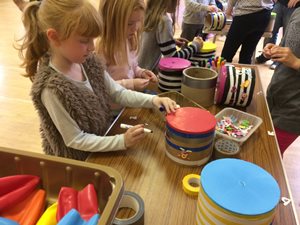 They learned a very groovy dance song called ‘God put rhythm in you,’ with Aimee and Victoria from the Connor Children’s Council teaching some cool moves!

As well as the on stage programme, the two adventure days featured a musical instrument making workshop where the children crafted a range of drums, castanets and maracas.

Diocesan Children’s Project Development Officer Jill Hamilton said: “Our huge thanks to Kasala Gilchrist and the team at Ballymoney who hosted us so brilliantly and took complete charge of the leaders’ café.” 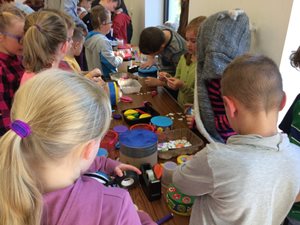 Great concentration during the workshops at Kids Big Adventure in Glenavy.

Jill said both days had been a great success: “We are very grateful to all the leaders who organised groups, sorted out forms, booked buses and gave up their Saturday afternoon to be with us and support the children in their group. We were delighted to have so many kids come along and a big thank you to all of you who did come and for joining in with so much enthusiasm.”

She thanked Andrew Neill the children’s and family worker at Glenavy (and Connor Children’s Council member) for his behind the scenes organisation and for doing the sound and drama.  Jill also thanked Andrew’s team who came along to support the event.

Jill added: “Finally huge thanks to all the members of our children’s council who give up their time so willingly and make eejits of themselves up front in order to touch the lives of our children and support all our wonderful Connor leaders. Your efforts are greatly appreciated!”

Full reports of the two Kids Big Adventure Days can be found on the Ripple Connor website: