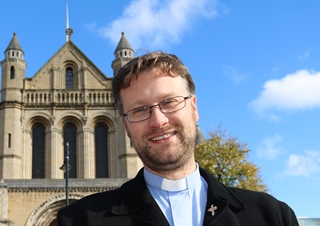 The Rev Mark Niblock, Dean’s Vicar at St Anne’s Cathedral, Belfast, has been appointed a Canon of the Cathedral by the Bishop of Connor, the Rt Rev Alan Abernethy.

Mark, who was formerly Priest-in-Charge of St Colmgall’s, Rathcoole Parish, Diocese of Connor, was nominated Canon Treasurer by the Dean of Belfast, the Very Rev John Mann.  He succeeds the Rev Canon Denise Acheson who is taking up a new post at Lisburn Cathedral.

Mark is married to Cherry and is father to two boys. A native of Bangor, he is a former student of Bangor Grammar School. He read Theology at Fitzwilliam College, Cambridge, and after graduation worked for James Brown and Sons Funeral Directors from 1999 to 2006.

Mark was curate assistant in Agherton Parish, Portstewart, from his ordination in June 2008 until his move to St Comgall’s, Rathcoole, in May 2012.

He was appointed Dean’s Vicar at St Anne’s Cathedral in April this year.