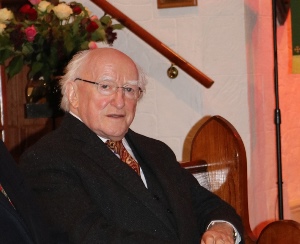 He then travelled a short distance up Donegore Hill to the studio of stained glass artist David Esler where he was shown a window crafted by members of the Dalaradia Group, a community organisation of men who wish to make a positive and peaceful commitment to conflict transformation.

The same group had voluntarily given their time to tidy up the St John’s graveyard, including Sir Samuel Ferguson’s grave, and to clean all the windows in the church, which is almost 200-years-old but is on the site of an Anglican church dating to the 14th century.

The Irish President was met at the gates of St John’s by the curate, the Rev Andrew Ker, Mr Robert Williamson, chairman of Dalaradia, and Dr Ian Adamson OBE, a former Lord Mayor of Belfast and the city’s first Honorary Historian. 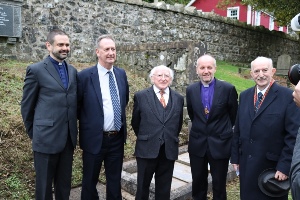 Among the guests was the Bishop of Connor, the Rt Rev Alan Abernethy; Connor Diocesan Development Officer Trevor Douglas, and members of the Dalaradia Group.

They were welcomed by the Rev Ker, and there were speeches by Mr Williamson, and by President Higgins who spoke of the ‘profound and inspiring legacy’ of Sir Samuel Ferguson.

“I am delighted and honoured to visit such a beautiful church,” the President said. “I remember studying Sir Samuel Ferguson and his work, and have been talking for years about wanting to visit his resting place.”

Guests were entertained with music played on the Mountain Dulcimer by Paul Atcheson-Blair from the Dalaradia Group.  This instrument is unique to the Appalachian Mountains in America where many Scots Irish made their homes.

The Rev Ker gave the President a short tour of St John’s, showing him the beautiful war memorial crafted from ceramic poppies used in the Tower of London WW1 centenary display, and the unusual Donegore Parish Roll of Honour, written in 1916, half way through the war! 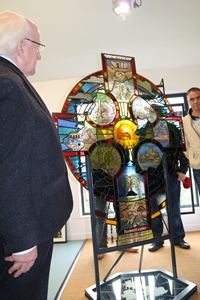 At the graveside, Dr Adamson said a few words, reflecting on Sir Samuel’s express desire to be laid to rest in Donegore, and the Bishop of Connor said a prayer of thanksgiving for literature, culture and for writers.

The group is made up of men from Newtownabbey, Carrickfergus, Belfast, Larne and Antrim who, in seeking conflict transformation, explore aspects of their historical and contemporary identities on the islands of Ireland and Britain.

Working with the Institute for Conflict Research on a programme ‘Back to the Future,’ the group created the window under the tutelage of master glass maker David Esler. It depicts images of Ulster’s rich heritage and culture, in the shape of a cross mounted in a portable stand.

Sir Samuel Ferguson was born in Belfast in 1810 and studied law at Trinity College, Dublin, supporting himself along the way by writing. He practiced law as well contributing articles on topics of Irish interest to antiquarian journals. 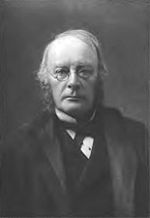 His collected poems, Lays of the Western Gael was published in 1865, resulting in and honorary degree from Trinity. In 1867, he retired from the bar to take up the newly created post of Deputy Keeper of the Public Records in Ireland. As reward for his services, he received a knighthood in 1878.

Sir Samuel’s major work, the long poem Congal was published in 1872 and a third volume, Poems in 1880. In 1882, he was elected President of the Royal Irish Academy, an organisation dedicated to the advancement of science, literature and antiquarian studies.

He died in August 1886. (Information on Sir Samuel Ferguson from Wikipedia)

“On the 12th of August the funeral procession – one of the most numerously attended ever seen in Dublin – left 20 North Great Street for St Patrick’s Cathedral. The coffin, covered with laurel and floral wreaths, was received at the entrance by the Dean and officiating clergy, including the Archbishop of Dublin.

“At the conclusion … all that was mortal of Sir Samuel Ferguson was conveyed to the family burying-ground in the county of Antrim. The procession to Donegore was accompanied by the Bishop of the diocese and many other mourners. Here, at the grave, the service was completed by the Bishop, his old and faithful friend William Reeves, in “hope of the resurrection to eternal life,” and the spot is marked by a simple tablet.”

Extract from ‘Sir Samuel Ferguson in the Ireland of his day’ by Lady Ferguson published in 1896.