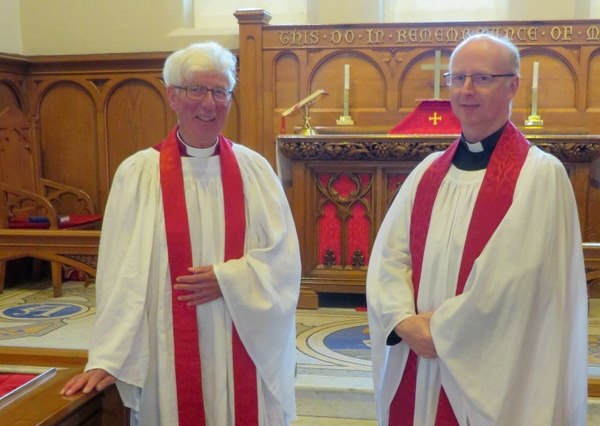 Archdeacon Jack Patterson celebrated a mid-week Holy Communion Service in Agherton Parish Church, Portstewart, to mark the 50th anniversary of his ordination to the priesthood.  He was assisted by the rector of Agherton, the Rev Stephen Fielding.

Jack was made deacon on June 27 1965 by the Rt Rev RCH Elliot DD, Bishop of Connor in St Anne’s Cathedral, Belfast, and on St Peter’s Day 1966 he was ordained priest in Christ Church, Lisburn.

From 1965-68, Jack served as curate-assistant in the in the parish of St Paul Belfast, and then as senior curate in the parish of Larne and Inver with special responsibility for All Saints’, Craigyhill, from 1968-72.

In 1972 he was appointed rector of Ballintoy with Rathlin Island, to which Dunseverick Parish was added in 1978, and remained rector of these parishes until his retirement in 2005.  In 1997 Jack was made a canon of St Anne’s Cathedral, Belfast,  and became Archdeacon of Dalriada in 2001.

All of his almost 40 years in the ordained ministry of the Church of Ireland was served in the Diocese of Connor, with the last 33 years served on the beautiful north coast of Co  Antrim where he was, and still is, a popular and highly respected figure.

On retirement in 2005 Jack and his wife Frances moved a few miles west from Ballintoy Rectory to a new bungalow on an elevated site overlooking Whitepark Bay.  They became parishioners of Agherton and remain regular attenders there.