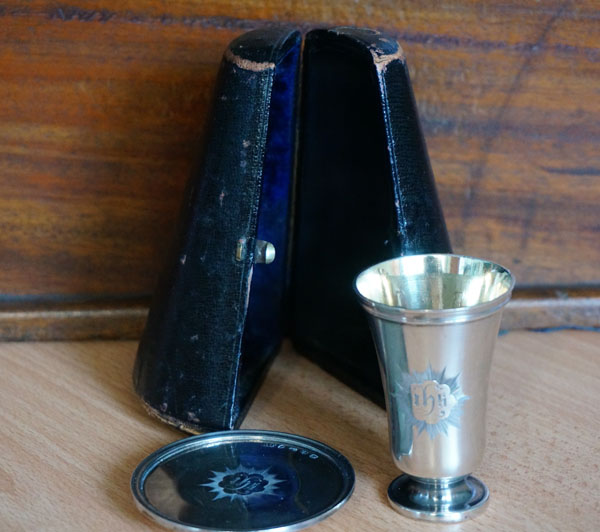 The beautiful communion set dates to 1866.

A small but unusual gift with a long connection to Connor Diocese was presented to St Anne’s Cathedral, Belfast, on St Andrew’s Day (November 30).

The gift, which will remain in the Cathedral for safekeeping and display, is the private communion chalice and paten of Canon Richard Irvine DD, and it dates back to 1866!

Canon Irvine was ordained deacon in 1860, priest in 1861, and was curate-assistant successively of Glenavy, St George’s and Christ Church, Belfast, before spending 34 years as Rector of St Stephen’s, Belfast, until his death in 1903. He was Prebendary of Rasharkin in the Chapter of St Saviour in Lisburn Cathedral for the last five years of his life.

The chalice and paten are of an old-fashioned design with the cup of the chalice on an almost stemless base. They were given to Canon Irvine on February 8 1866 – with a hundred sovereigns, no less – by the congregation of St George’s, Belfast, as he left to take up his new position across the city in Christ Church.

At some stage, probably after Canon Irvine’s death, it is thought they may have been returned to St George’s for the use of another priest – these things are routinely handed on – and were given to Canon Noel Shortt, PhD, who was a Canon of St Anne’s Cathedral from 1996 until his retirement in 1999.

Mrs Evelyn Shortt presented this gift to St Anne’s, and while the clergy will use it occasionally, it will be primarily be on display and be held with the other silver treasures of the Cathedral.