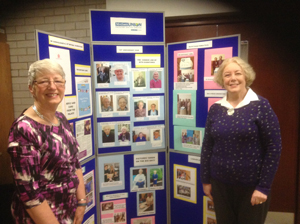 Connor Mothers’ Union has put together a display of photographs and signatures of 12 MU members who celebrated their 90th birthday this year.

This was on show at the Diocesan MU Council Meeting in Broughshane in November.

The 12 names, photos and signatures were among 400 included in a card which was presented to Her Majesty the Queen at the Patron’s Lunch in The Mall, London, during the Queen’s 90th birthday celebrations back in June.

All 400 ladies named in the card turned 90 in the same year Her Majesty turned 90. Connor Diocesan President Valerie Ash was one of 22 MU members who attended the Patron’s Lunch (the Queen is an MU Patron) and she was the only member there from Ireland. 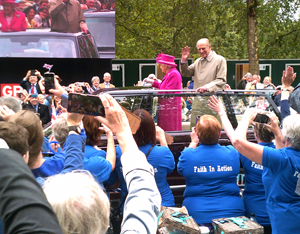 MU members, including Diocesan President Valerie Ash, wave to the Queen and Duke of Edinburgh during the Patron’s Lunch on the Mall back in June.

Everyone who attended was given lunch in a picnic basket, and Valerie and the other MU members watched the Queen and Royal Family drive up the Mall. The Royals later went on a walk-about and it was during this time that the MU Worldwide President Lynne Temby presented the birthday care for the Queen to HRH the Duke of Wessex.

Valerie said it had been a ‘marvellous day!’